Share All sharing options for: Amir Johnson returns — and won’t be traded 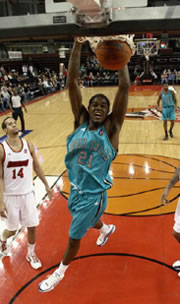 Amir Johnson returned to the Pistons following a six-game stint with the NBDL's Sioux Falls Skyforce. While the level of competition in the D-League isn't anywhere near the NBA, it was good to see Johnson get some regular playing time.

A lot of fans (myself included) have high hopes for Johnson, who has the athletic ability to be a big star in this league someday. He very rarely gets into games with the PistonsJohnson has played all of 60 minutes over 12 games in his brief NBA career., but I don't doubt that he'd be playing significant minutes every night for a lot of teams around the league were he in a different situation. That said, I was encouraged to read the following in the Detroit News regarding his brief stay in the D-League:

His play drew a lot of attention from NBA scouts and general managers, many of whom have contacted the Pistons about Johnson. President Joe Dumars made it clear Johnson was not available.

"Amir might be the only untouchable in the league who's on the inactive roster," said George David , director of scouting.