Share All sharing options for: Pistons vs Matt Carroll 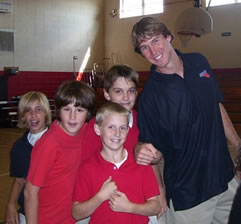 Tonight the Pistons take on Matt Carroll (he's the guy on the far-right).

They'll face some of his Bobcats teammates, sure, but it's Matt Carroll I'm most concerned about. Behind his deceiving Pennsylvania school-boy smile is a cold-hearted Pistons killer -- he's already led the Bobcats to two wins over the Pistons this year, which is two more than I expected.

"Carroll, he's going to be a write-in candidate out of Detroit, for the All-star ballot, on how he's played," Saunders said.

Ball tips at 7 pm on FSN. Share any game thoughts and Matt Carroll nightmares in the comments.