Share All sharing options for: Pistons beat Matt Carroll and the Bobcats 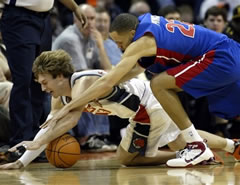 I said before that stopping Matt Carroll was key for the Pistons in stopping the Bobcats, and in hindsight I'm going to pretend it wasn't completely tongue-in-cheek. Carroll scored just four points -- all at once after being fouled on a three-pointer -- in 20 minutes of action.

When the Pistons played the Bobcats the first three times this year, Carroll was just another guy off the bench, so holding him to four points shouldn't be considered all that great of an accomplishment. But given his Piston-killing tendencies as well as the fact that he had been averaging better than 17 points a game for the month of January, I'm very satisfied with how the Pistons contained him.

Of course, I can't say the same for Gerald Wallace (29 points, 11 rebounds) and Emeka Okafor (17 points, 16 rebounds), or even Raymond Felton (17 points, eight assists). Those three racked up the numbers on a defensively challenged squad from the Detroit, and if they could have gotten a little more out of Carroll and even average production from Adam Morrison (six points, 2-9 shooting), the Pistons probably would have lost their third game of the season to the Bobcats.

Offensively, Detroit still suffered through droughts now and again, but in the end Chris Webber (19 points), Rasheed Wallace (20) and Rip Hamilton (22) paced the team while receiving only nominal scoring punch from the bench. I'm not going to get too excited about the front-court production: it's should be noted that Charlotte started four guys listed at 6-7 or shorter, with Okafor (6-10) anchoring the middle. As much as anything, I'm guessing that's why Rasheed and Webber shot a combined 14-18 from the field -- they were often at least two or three inches taller than the guy they were going up against.

But despite the size advantage, Detroit got killed on the boards 42-31. Those numbers are partly skewed by the fact Detroit shot 52% from the field, but time and again they gave up far too many defensive rebounds.

Flip Murray got the dreaded DNP-CD as Lindsey Hunter handled backup point guard duties, scoring six with two dimes in 13 minutes. Jason Maxiell played only three and a half minutes, which is shame considering Charlotte's undersized frontline -- Flip Saunders left a lot of uneaten babies on the court with that decision. Even so, in that much time he still found time to block a shot, grab a rebound, hand out an assist ... and commit two fouls.

As you can see from the GameFlow, this was a close game in which Detroit was never able to pull away until the fourth. That's as good as any time to do it, I suppose, but a little more defensive effort could have made things a bit easier.

But here's the good news: with the win, the Pistons pulled ahead for the No. 1 seed in the East, currently sporting a .600 winning percentage (take that, Darryl!) and sitting a half-game ahead of the Wizards -- who, incidentally, will be at the Palace on Friday. Talk about nice timing -- that should be a really interesting game, though Detroit's inability to contain Charlotte's top three admittedly has me worried about the Wizards' Big Three of Gilbert Arenas, Caron Butler and Antawn Jamison.