Share All sharing options for: Pistons vs. Agent Zero 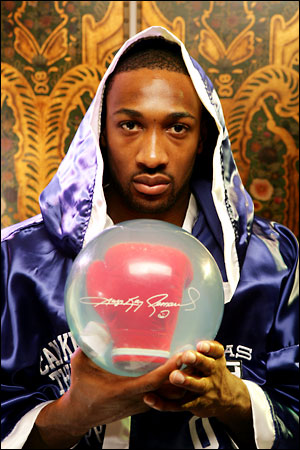 [First things first -- the game starts at 7pm, it was changed to accommodate ESPN. If you're going, get there early to get your Rasheed bobblehead.]

Gilbert Arenas is a funny dude, and he's making a lot of new fans this year. The guy has emerged as both one of the league's most dangerous players in the clutch and one of the most entertaining interviews in the locker room.

He throws million dollar birthday parties and sponsors professional X-Box Halo teams. He has cool nicknames like The Black President and Agent Zero. He's admitted to bribing Foot Locker employees with free gear in the past just to get his hands on a box of All-Star ballots -- so he could vote for himself.

Seriously, I could go on for a while ...

But as much fun as I have watching the guy, what worries me the most is how he carries a grudge. After being cut from Team USA during the summer, he's gone on a revenge tour against Suns coach Mike D'Antoni and Blazers coach Nate McMillan, who were assistants to Mike Krzyzewski. He already lit up the Suns once for 54 points, predicted another 50-point outburst against the Blazers and is on the record saying he'd give up a year of his NBA career just for the chance to go back to college and take it to Coach K at Duke.

How does this tie into tonight's game? Well, Gil was apparently upset at Flip Saunders last year when Flip played him only nine minutes in the All-Star game, and he took it out on the Pistons by winning in March to complete a three-game sweep for the Pistons. Granted, Gil was voted into the All-Star Game as a starter this year, so I'm hoping he's already forgotten about whatever chip he put on his shoulder.

Not to be lost in the individual battle, of course, is the fact the Pistons and Wizards are currently No. 1 and No. 2 in the East. Detroit beat Washington earlier this year in November -- their first regular-season win against them since 2004-2005 -- but that was back when Arenas (and the rest of his teammates) were still rounding into form. Now, they're as much of a contender in this watered-down Eastern Conference as anyone.

Game starts at 7 pm, an hour earlier than usual -- set your Tivo's (or get going to the Palace) accordingly. As usual, leave your game thoughts in the comments.