Pistons more than OK against Hornets

Share All sharing options for: Pistons more than OK against Hornets 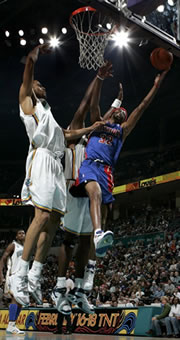 With Chauncey Billups ailing and Rasheed Wallace quite clearly playing at something-less-than-100%, the Pistons limped into Oklahoma City on Thursday. Fortunately for them, they arrived to find the Hornets -- without Chris Paul, Peja Stojakovic and David West -- laid up in a full body cast.

Instead of playing down to their level of competition, the Pistons realized their advantage early and immediately stepped on the gas. Rip Hamilton scored 17 in the first quarter alone and helped Detroit to a 55-32 lead entering halftime. Although Detroit's offensive intensity waned in the second half, the defense remained stifling as the Pistons cruised to an easy 92-68 victory. That'll help the ol' points differential.

As for the Flip Murray Experience, well, you just can't fit what he brings to the game inside of a box score. Starting for Billups, he scored seven on 3-9 shooting with five assists. Defensively? Well, JackDutch said it best:

is there a stipulation in flip murray’s contract that if you get crossed up by jannero pargo, said contract is null and void? ian, matt, one of you cats is a lawyer, right? there’s got to be a "pargo clause" in there.

Ian is the cat in law school, and he's pretty sure such a clause doesn't exist. And that's a shame, because it should.

Time to nitpick: Blowouts have been few and far between for the Pistons, and it was nice to see a game where Flip Saunders could empty the bench. But why not pull the starters even earlier? Tayshaun Prince (15 points, 10 boards) played better than 39 minutes -- three more than his season average. Why not sit Prince earlier and give Carlos Delfino 25+ minutes?

As it was, the Dolphin finished with 15 minutes, scoring 13 with five boards and a pair of steals. I know Prince is the youngest of all the starters, but come playoff-time he's usually the most overworked. It's a minor issue to point out right now, but I'd take advantage of as many opportunities to rest him in the regular season as possible.

Amir Johnson made an appearance in the fourth quarter, but unfortunately for Detroit fans eager to see him on the floor TNT decided to cut away from the game for a couple of minutes right about the same time. From the box score, it doesn't look like Amir did much -- he didn't attempt a shot, grabbed a rebound and committed a pair of fouls and turnovers. But that's not the point -- I wanted to see as much of his floor time as possible -- does he look comfortable out there? is he lost? is my desire to see him included in the rotation this year completely misguided? Oh well.

This is where my recap comes to an end, but in case you missed it The Mighty (prolific) MJD live-blogged the game over at the FanHouse: 1st half, 2nd half. The whole thing is worth checking out, but here are some highlights:

- Maxiell pulls down a BEASTLY rebound, but went over a guy's back... Maxiell's undersized, but freakishly athletic, and OH... that was right on cue, he just beat everyone down the floor on a break and threw down a thunder-flush. Maxiell is the man.

- And there's Rip Hamilton lofting an alley-oop to Maxiell, who throws it down in a way that discourages anyone from trying to interfere with his progress. 44-25 Pistons, and thank you, Jason Maxiell for making this game more fun.

- Ooooh... Pargo with a sweet crossover. He left Flip Murray standing there with his mouth hanging open.

- And the lead is down to 17 here... the Hornets have come out with more energy here, the Pistons have been careless with the ball (by letting Flip Murray touch it), and it's costing them.

- Pargo again beats Flip off the dribble, but gets to the bucket, turns around, and throws up a reverse one-hander that took a chunk of glass out of the backboard. Anyone but Jannero Pargo would be feating on Flip Murray right now.

- Pargo just beat everyone down the floor for a fast-break lay-up attempt... Maxiell erased it, though, and returned it to sender. I love watching Maxiell. He's like the kid that was left behind a couple of years... like a 12-year-old playing against 4th graders.

- Will Blalock has not been as steady in the second half as he was in the first. He's turned it over a couple of times, he's not playing with the confidence he was in the first. Then again, his teammates have let their foot off the gas pedal, too. I still think he could can be a quality reserve NBA point guard.