Share All sharing options for: See what you’re missing, Ben? 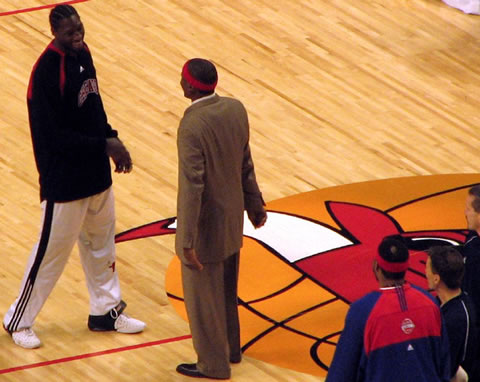 DBB reader MichSt was at the game Saturday and caught Lindsey Hunter playfully greeting Ben Wallace at center court with a headband. From Detroit News:

Richard Hamilton and Chauncey Billups both tried to present Wallace with a red headband before the game. Lindsey Hunter greeted him wearing one himself, all in honor of Wallace’s headband stand with the Bulls earlier this season.

"I think the whole team came out with those headbands. I think that was premeditated on their part," Wallace said, smiling. "It was all good though."

Here's another one with Sheed:

Keep the pictures coming! You can add them to the Detroit Bad Boys photo group on Flickr yourself, or email them to me and I'll do it for you.

Here another that DBB reader Roscoe sent me -- that's Ben at center court talking to some of the Pistons while they're stretching, as well as Carlos Delfino chatting with someone who appears to Andres Nocioni, a fellow Argentinian: