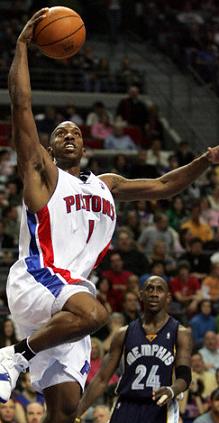 Regardless of the supposed lack of severity of Chauncey Billups' strained calf, his absence during the past three games has highlighted one of the Pistons' most glaring weaknesses: the backup point guard position. With Billups out, Piston reserves Flip Murray and Will Blalock have averaged 10.3 points, 6 assists, and 3 turnovers in their combined 48+ minutes per. Not awful, and frankly, not nearly as bad as I expected (though the numbers are bouyed by Flip's 18 point performance in the New Year's Eve loss to Phoenix). But Billups, before his injury, was averaging 18 points and 8 assists in 38 minutes. Add in the points scored by his reserves in roughly ten minutes of backup time, and the Pistons have lost close to 10 points and a few assists per game from the point guard position. That is a painful dropoff in just the tangible categories.

Sadly the Pistons' current difficulties were publicly predicted by Joe last season. Following the trade that sent Carlos Arroyo and Darko to the Magic, the Pistons were left with Lindsey Hunter as their primary backup at point guard. Hunter, for all his defensive prowess and leadership intangibles, has been rightly criticized for his propensity for pounding the rock and his tunnel vision on fast break opportunities. In short, as great as he was on the defensive side of the ball, on offense he was often a liability.

But Joe seemed less than pannicked about a potential injury to Billups after the trade deadline last season. Speaking just after the Arroyo trade about the Pistons chances of winning the championship last year, Joe was resigned to the fact that without Chauncey, this team had no shot regardless of who his backup was. Joes exact quote: (from the Detroit News -- link is now dead).

"The ultimate question becomes, what if something happens to Chauncey (Billups )?" Dumars said. "Well, who are we going to get if something does happen to Chauncey that's going to lead us to a championship anyways? Don't kill yourself with that. You're up a creek without a paddle there anyways. You know what I mean?"

Flash forward to this past offseason. After scrapping the "Tony Delk: backup point" experiment (Delk is now playing in Greece), the Pistons drafted point guard Will Blalock with the last pick of the draft (#60). Blalock, a junior out of Iowa State, was praised for being a true pass-first point guard with good court vision, ballhanding, and passing skills. But his overall offensive game was still in need of development if he was going to play at the NBA level, and he was not expected to contribute immediately to this year's Pistons.

In addition to drafting Blalock, the Pistons also re-upped with Lindsey Hunter for two years. Hunter, who turned 36 in December, was again the lone experienced backup point guard on Flip Saunders' roster. And just like that, the Pistons were once again gambling that Billups would maintain his remarkable health (Billups had missed only three games in the previous two seasons before this year).

Finally, to cap the offseason, the Pistons went out and signed Flip Murray for the bi-annual exception. Our undeniable dislike of Flip's performance in Blue aside, it was a savvy move by Joe at the time, an attempt to add some scoring punch on the cheap. But as Matt pointed out in his post discussing the trade, Murray would never be mistaken for a point guard.Flip's legendary ball-hogging was one of the reasons Sonics fans were driven to create TradeFlipMurray.com... a url which is now back on the market... hint, hint.

Well, back to present day, and the Pistons' recent play has proven Joe correct in one regard -- the Pistons probably will not beat many elite teams without Chauncey Billups, and therefore definitely wouldn't win a championship without "Big Shot." But you have to question whether it was wise to enter the season without an offensively capable backup at the position.

Whether or not a backup point can win you a championship is one question. But during the regular season, starting a suitable backup during Chauncey's injury -- like Memphis' Chucky Atkins, who signed a one-year, $3 million deal with the Grizzlies this offseason -- could lead to more "in the meantime" wins against the middle of the NBA pack. And as Matt pointed out after Saturday's loss to the Bulls, the separation between the first seed (with the guarantee of home court advantage throughout the EC playoffs) and the fifth seed could ultimately be decided by a handful of victories obtained while at less-than-full strength.

If this Piston team is healthy come playoff time but is looking up at four or five teams in the Eastern Conference standings, I'd venture to guess that the lack of a offensively-adept backup point will be listed as a top culprit. To complicate matters, you wonder whether Sheed's gimpy-ness will still allow Joe to dangle double-D's desirable expiring contract at the deadline in an effort to obtain backcourt help.

What we're left with -- the stretch of games against mediocre opponents beginning tomorrow night in Philly will be a clear indicator of how far this team has fallen off without Billups. Flip Saunders, aka Captain Obvious, blames the team's woes on a lack of consistency (from MLive):

But unfortunately, with no better options, that consistency on offense will have to come from some on-court combination including either Flip Murray or Will Blalock.

Dumars: It was time to move on [Detroit News (this article is no longer available online)]
Billups' replacements not giving Pistons what they need [MLive]