Share All sharing options for: Schizo Pistons remembered their meds in New Jersey

[Disclaimer: I had an extensive recap 99.9% done when I accidentally managed to hit the back button on my browser ... and ... I ... lost ... everything. I tried cursing, but that didn't work. As a result, you're stuck with this.]

Will the real Pistons please stand up? Because the team that put away the Pacers on Sunday and completely decimated the Nets on Wednesday barely even resembles the unit that had its shorts handed to them by the Wizards on Tuesday.

Bouts of schizophrenia aside, I like to think this is what we're going to see more of the rest of the way. The biggest difference between Tuesday and Wednesday was the energy level from the get-go. The Pistons were aggressive from the start on Wednesday, and I think that helped win over the referees. Case in point: they had six free throw attempts in the first three minutes alone last night, the same amount they attempted in three entire quarters the night before. In fact, getting to the line and taking advantage was a running theme for almost the entire game: the Pistons set a team record by nailing their first 27 attempts.

As impressive as most of the starters were (Rip Hamilton played well and Chris Webber bounced back but Rasheed Wallace failed to score a single point), it was encouraging to see the bench come through. This was a blow-out through and through, and none of the starters played more than 33 minutes, with Rasheed and C-Webb playing no more than 23. 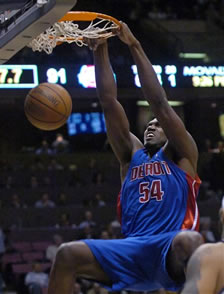 But did you see Jason Maxiell? The kid has turned in some good performances this year but the day he finds out he got left out of the Sophomore-Rookie Challenge he decided he'd have himself another coming out party. In 25 minutes he scored 16 points with six boards, two blocks and a steal. His block on Antoine Wright was awe-inspiring, stopping a dunk in mid-air. Poor Wright helplessly crumpled to the ground like, well, someone just ate his baby.

Maxiell had a couple of other highlight-reel plays, including an impressive tomahawk jam on a fast break. What impressed me most, though, was the fact he shot 6-6 from the line. As aggressive as he is in the paint, he draws a heckuva lot of a fouls, and he's left a lot of points on the floor by shooting just a hair over 50% this year. He didn't just rack up stats in garbage time: he played all but 30 seconds of the second quarter, during which time he scored half his points with two offensive boards and a block.

Who spiked Mikki Moore's coffee? Moore spent the first four years of his career with the Pistons, with only one of those years spent as a regular member of the rotation. He's played for six other teams in the last six years and is in the midst of his second stint with the Nets.

It took a few injuries for the opportunity to arise, but he's played well since entering New Jersey's starting lineup this year. The guy may be 31 years old, but he has several seasons of energy pent up inside and plays like he's trying to expend it on every single play. He scored 18 of his 20 points in the first quarter, and as Greg Kelser noted during the FSN telecast, he got nearly all of those without the benefit of a single play called for him. He's a non-stop hustler who's going after every rebound and every loose ball. Kudos to him: although he was shut out in the second half, he kept the Nets into this game far longer than it looked like the rest of his teammates really wanted. He's going to be a free agent this summer, and I hope he gets a good deal.