The "No Ginobili" t-shirt

Share All sharing options for: The "No Ginobili" t-shirt

It has been a banner week for Manu Ginobili.

First, he "accidentally" gets smacked in the mouth by Kobe Bryant in the waning moments of Sunday's Spurs win over the Lakers. Then, after Bryant is suspended for a game as a result, the replay of the blow -- and of Ginobili collapsing like he just saw Eva Longoria without makeup -- is looped on ESPNews every 30 seconds for 48 straight hours. That couldn't have been good for the ol' ego.

An ironic twist to all this: the shot that felled Ginobili actually looks like it may have hurt, as opposed to the phantom-induced flops which Manu is known for. And that rather coursely orchestrated segue leads us right into the introduction of the second Detroit Bad Boys t-shirt design, "No Ginobili." 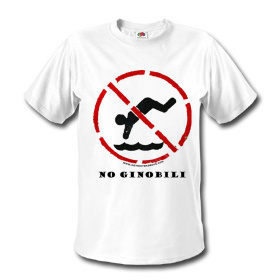 As you can see, this dapper number is a tribute to Manu being Manu. Because, aside from wooing the ladies, what does Manu do better than hit the hardwood? The man is Laimbeer-esque! And in light of the fact that the NBA could soon be cracking down on these pranksters, we thought there no better time than the present to celebrate Manu's diving prowess.

So here's to you, Manu. And let's hope that at least one of these babies greets the Spurs when they make their Valentine's Day visit to the Palace in a couple weeks.