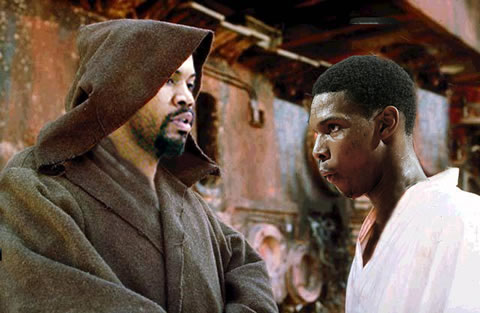 Sheedi-Wan-Kenobi teaches his young student Chris Bosh-walker. Much thanks to DBB regular Tim, who's equally adept with Photoshop as he is picking up the DBB slack and crafting game recaps:

It was nice to see Rasheed Wallace finally remember he is an all-star power forward. He was getting it done all over the floor tonight, but did most of his damage where he should… on the block. He made all-star Chris Bosh look like a complete rookie as he repeatedly got deep post up position and just abused him. It was a clinic on the PF position.

(It’s too bad the refs insist on T-ing up Sheed every game. My problem is the inconsistency. TJ Ford had to be restrained while screaming, but Rasheed says "Whoooo" and he’s T’d… whatever)

The Pistons started the game in the red, but the zone defense came through again. All you Flip Saunders bashers… you have got to give the guy some credit for this one. The zone lead the team back into the game. It was tight the whole way, with various unpronounceable raptors hitting all kinds of tough shots. But the crazy howelings of Sheed got inside the head of Bosh, and a 3 ball at the 2:47 mark of the 4th drove a stake through the heart of the raptors chances. The game ended 98-92 Pistons. They extended their winning streak to 6 with one game to go before the break.

What a great couple of games for the Pistons. First they take Black Mamba and make him look … well… human, and then cool of a red hot raptor team. [Two] more games before the all-star break and the boys in blue are finally rounding into shape. The addition of Chris Webber has sparked our, at times, lethargic offense and strengthened our defense. With C Webb starting we are scoring 3 more points a game while giving up 3 less. We are [10]-2 with C Webb starting. Joe D has done it again. Now all we need to do is unload Flip Murray!

For those interested in numbers and stuff, Rasheed finished with 28 on 12-22 shooting with two blocks and seven boards. Bosh had 14 on 5-15 shooting with 11 boards and five turnovers. Advantage: Wallace.

It might seem odd suggesting the addition of Webber helped improve the defense, but Tim isn't alone in thinking this. In today's Free Press, Krista Jahnke notes how Webber's arrival has helped the Pistons improve at, well, everything:

It's hard to quantify something like this. There's more talking on defense; everyone is locked in. There is more hustle in everyone's step, even against bad teams. There are more assists, more passing because, as coach Flip Saunders put it, Webber's "passing breeds passing."

And there is more movement on offense.

"Guys seem to cut harder, because they know if they cut hard and they're open, he's going to get him a pass," Saunders said. "You don't know what kind of pass might be coming, where it's going to be coming from. Those type of things do energize."

The passing certainly seems contagious: I noticed Rip Hamilton finished with eight assists, and has averaged 8.6 in his last three games -- almost five more than his season average (3.9). He finished with 21 points. Chauncey Billups scored 14 with nine assists.

Unfortunately I was out of town and forgot to set the DVR for Saturday's game, but after watching the video of Rasheed's tech (and T.J. Ford's non-tech) over at Need4Sheed, it's obvious the refs still see a huge bullseye on his back. He knows it, too -- from the Free Press:

"It was crazy, man, all I said was, 'Woo,' and gave the ref the ball and then it's a tech on me," Wallace explained. "But, you know, (Raptors coach) Sam (Mitchell) was in his face third-quarter -- nothing. ... And then, with the offensive charge on the young fella, T.J. (Ford), and he slammed the ball or something, it was nothing. But I already know I'm a target, though. I ain't worried about these cats."

Unless this tech is rescinded (Flip Saunders said the team will likely file an appeal on Rasheed's behalf), Rasheed's next tech will be his 16th, which will result in a mandatory one-game suspension, followed by another one-game suspension for every other technical after that.Anyone want to guess if his next tech happens before the All-Star break? I'm predicting "yes," in Wednesday's game against the Spurs.

Also, random but amusing -- from the Toronto Star:

They scared the P.A. announcer at The Palace of Auburn Hills last night. The man behind the microphone referred to Jorge Garbajosa, at one low moment, by a moniker that resembled "Gar-Har-Boss." He called Andrea Bargnani, on various attempts, "Barney-Yarney" and "Barney-Yoni" and, at his breaking point, simply "Barn" – one syllable. So much for the pre-game tutorial from a member of the Raptors' media relations staff.

In any case, thanks again to Tim, whose fingerprints are all over this post.