No homecoming magic for former Pistons

Share All sharing options for: No homecoming magic for former Pistons 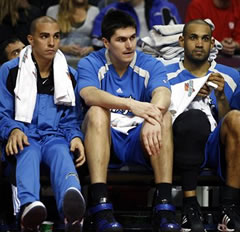 After letting the Bucks not only sneak back into the game but also have a chance to win it at the buzzer, the Pistons entered Tuesday's contest against the Magic determined not to let this game stay close. It worked: after grabbing the lead for good midway through the first quarter, the Pistons led by as many as 31 before settling with a 22-point victory.

Chauncey Billups talked about the team's mindset after the game. From the Detroit Free Press:

After a bad stretch in the second quarter, point guard Chauncey Billups asked teammates during a time-out to put the Magic away.

"I said, 'This is the time,' " Billups said. "This is what we need to learn from yesterday (in Milwaukee). We started getting good shots, opened it up ... and came out in the third quarter and stayed on it."

The return of Darko, Grant Hill and Carlos Arroyo was supposed to be the main storyline of this game, but early in the game it was all about the referees. The two teams combined for 72 free throws, including 54 in the first half alone. But despite the choppy stop and go rhythm, the Pistons still managed to shoot 50% in the first half and 52% for the game.

Chris Webber caught an accidental Dwight Howard finger in the eye in the first couple of minutes. Soon after, he headed back to the locker room, with the official word being that he was "unlikely to return." But there he was on the floor early in the second quarter, finishing the game by matching Rip Hamilton with a team-high 18 points (8-10 shooting) in 22 minutes. Filling in for C-Webb in the first quarter, Dale Davis came through with four points, four boards and two blocks in just under seven minutes.

Rip played a team-high 34 minutes as the team's lead allowed the starters to check out early. Three guys played at least 19 minutes off the bench, and every single player in uniform played at least eight minutes. Lindsey Hunter was extremely efficient off the bench, scoring 13 on 4-6 shooting in 20 minutes, including seven straight points in the second quarter. Carlos Delfino shot just 1-5 to finish with four points, but he also grabbed seven boards in 21 minutes -- it's becoming uncanny how well he finds the ball off the rim.

If the Magic are looking for revenge they won't wait long -- the Pistons travel to Orlando for a re-match at Amway Arena (yes, I'm serious, that's the name...) on Friday. Don't be so confident the Pistons will cruise to another victory -- the trade deadline is 3pm today, and the Magic might be looking to make a blockbuster.

Update: I totally forgot -- DBB reader Tim was at the game and snapped an awesome pic: 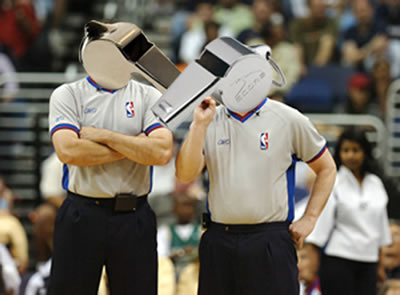