The Michael Redd-less Bucks hung around for two-plus quarters, but the Pistons pulled away for good with an infusion of energy from the bench midway through the third quarter. With Rasheed Wallace taking himself out of the game with one technicalHis 14th: two more and he's suspended. and Antonio McDyess of all people getting tossed for two quick techs, Nazr Mohammed and Jason Maxiell took advantage of some rare court time together to put their stamp on the game. 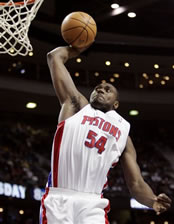 Nazr got the call to replace Chris Webber, who was having a hell of a time stopping Andrew Bogut inside. He helped slow the bleeding, but his most memorable contributions came in the form of some Bill Laimbeer-esque outlet passes: he triggered a pair of fast breaks, one that led to Maxiell getting (yet another) dunk and another that resulted in Maxiell getting to the line (Need4Sheed has the video). Although Nazr didn't score in nine minutes, he obviously helped the flow of the offense with those two passes, and he also finished with four boards and two blocks.

Maxiell scored 12 with two boards in 17 minutes, shooting 4-8 from the field and 4-6 from the line. Maxiell has been a flip of the coin at the line for most of the year, but after shooting 10-12 from the stripe in his last two games he's up to 56% on the season.

As for the rest of the line, Detroit came out with an extremely balanced attack. Chauncey Billups led the way with 20 points and eight dimes and Tayshaun Prince came through with a career-high 12 rebounds, including eight on the offensive glass. He scored 14, Webber went 12 and six in 26 and Rasheed had 14 and seven in 37.

The Bucks played only eight men and only really managed to get anything out of six. Andrew Bogut led the way with 21 points and 13 rebounds. He's still coming into his own, but he's the type of player that I think is going to give C-Webb the most trouble: someone who's athletic and quick for his size.

Charlie Bell and Earl Boykins were making a homecoming of sorts, reppin' Michigan State and Eastern Michigan, respectively. But both players shot just 4-12 from the field, and aside from a nice play here and there, neither one really made a significant impact.

As noted in the preview, Dale Davis wasn't active yesterday after sleeping through the morning shootaround. Accidents happen, right? Perhaps, but it almost sounds like he skipped the shootaround on purpose. From the AP:

Davis, who is frustrated after losing most of his playing time to Chris Webber, said that he didn't sleep through his alarm clock. "I didn't set it," he said before the game.

The decision clearly bothered Davis, who was not on the Pistons' bench prior to Friday night's tip-off.

Davis said he overslept, but added, "I’m not happy with the situation. But at the same time, it is what it is."

When initially asked about being on the inactive list for Friday’s game, Davis said, "I’m not playing anyway, so what’s the difference?"

In the seven games prior to Friday’s game against Milwaukee, Davis played a total of 22 minutes which includes four games in which he didn’t play (coaches decision) at all.

Chris McCosky spoke with Saunders following the coach's pre-game meeting with Davis. From the Detroit News:

"I talked to Dale when Chris first got here, and I talked to him again," Saunders said. "I explained to him that against guys like Shaq (O'Neal), Eddy Curry, Jermaine O'Neal, Zydrunas Ilguaskas, that's when he's going to excel. Hopefully he understands that. The important thing is, you put the team first and whatever role you are asked to do, you do it to the best of your ability."

This doesn't appear to be a huge issue, especially since Davis confirmed with Blakely that he hasn't requested a trade. From the sounds of things, the Pistons are no longer shopping Davis around the league, perhaps anticipating that his interior defense will be an asset in the stretch run. Rotated properly, the Pistons' front court has the potential to dominate, but by the same token it can be exploited when the opposition picks the right match up and Saunders is slow to respond. I can understand Davis' predicament -- at 37-years-old, he'd probably like as much court time as possible to prove to the rest of the league that he's worthy of a decent-sized contract this summer -- but he doesn't seem the like the type of player to let his personal frustration disrupt team goals.