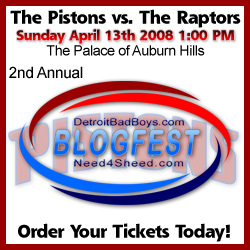 For the second year in a row, readers, writers and lurkers of Need4Sheed and Detroit Bad Boys will be getting together at the Palace to take in a game.

Last year we witnessed the sinking ship that was the reigning champion Miami Heat. This year, we'll be watching the up-and-coming Toronto Raptors, led by the red-hot Carlos Delfino (oh, and some guy named Chris Bosh). So mark your calendars: 6pm 1pm on Sunday, April 13. (Note the new time! The NBA bumped up the game so that it could be the first half of a nationally televised doubleheader.)

Last year was a lot of fun, but logistics got in the way -- we didn't announce it until after the game was already sold out, which predictably limited the turnout. But this year is different: not only do you have a month and a half warning, but the Pistons stepped up to the plate by not only setting aside a block of tickets so we can all sit together but also tossing in some free swag.

For $30 a ticket, you'll get a good seat, a free hat and a chance to mingle and exchange awkward high-fives with internet friends. Just download this PDF, fax or mail it in and you'll be good to go.

I hope to see a lot of you guys out there -- it should be a good game, and it'll be cool to put faces to names. You guys are the reason this site exists, so it's about time we finally met, eh?

Update: If you're on Facebook, you can confirm you're coming on this event page.