The Concerns About Rodney Stuckey

Share All sharing options for: The Concerns About Rodney Stuckey

As I've said before, Rodney Stuckey might be the happiest of all the Pistons that the west coast trip is behind them. Stuckey shot an abysmal 30% on the trip and capped it off with his lowest scoring output of the season, scoring just eight points against the Suns on Sunday night.

On the season, Stuckey is now shooting 39%, four percentage points lower than what he finished with last year, his second season in the NBA. Many fans believed this, his third, would be the year Stuckey exerted himself as the team's offensive leader and acted the part, too. If you ask fans how they feel about Stuckey after just fourteen games, they'd more than likely express disappointment.

Stuckey's supposed to fill the traded shoes of Chauncey Billups at the point guard position, but he continues to show that maybe he's just a two guard out of position. His assist numbers per 36 minutes are down by nearly two full assists a game this year and he doesn't seem to have the point guard's keen sense of his surroundings when he has the ball and drives to the hoop.

However, if he's going to be a shooting guard, he needs to shoot better than 39%. Chauncey Billups has shot 44% in his career just once (42% career average), but he can get away with that because of the shots he creates for his teammates as their point guard. If Stuckey isn't going to create shots, then he needs to make shots. It's science.

We are seeing some improvements in major areas. He is averaging nearly a full rebound and half a steal more per 36 minutes, and his free throw shooting has improved to 85% so far this year. He's also scoring almost a full point more, but he's also taking more shots.

Next, I looked at his shot chart to try and get an idea where Stuckey's poor shooting totals were coming from. I was pretty surprised to see that his struggles are actually with what should be the easiest shots. He's shooting a head scratching 39% on shots near the basket and a respectable 42% from mid-range. Stuckey's awful 22% from beyond the arc puts his overall percentage down to his season total, but he hasn't been shooting enough from outside to consider that a major liability, in my mind. 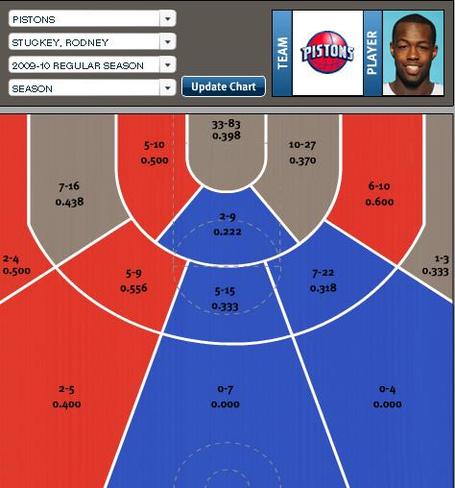 As you can see, Stuckey seems to like the right side, and naturally, because he is right handed. His third favorite shot appears to be from the right elbow (which often comes at ill-advised times in my opinion). Let's hope he either gets better with it or falls out of love with it because he's just 7-22 there on the season.

Again, what's most bothersome to me is that he's making just 40% of what are essentially layups. For comparative purposes, Lebron James is hitting those shots at a 71% clip and Will Bynum is making 56% this year. I honestly believe, with his size and strength, Stuckey should be somewhere in the middle of those two. If he gets to that point, he averages 25 points per game and the rest is moot.

So should the Pistons be concerned about Rodney Stuckey?

If people are expecting him to be the next Chauncey Billups, then maybe. He doesn't appear to be improving while serving as the point guard. Although I'll remind you, Chauncey only averaged 3.9 assists his first year with the Pistons and that was his sixth year in the league. Regardless, Stuckey does seem to be improving elsewhere in his game. If he can just somehow find a way to do some extra (contested) mikan layup drills to up that 40% average around the basket up to the 60% range, seeing him shooting the ball might not seem like such a drag after all (that is unless it's outside the arc, but we'll leave that one alone).