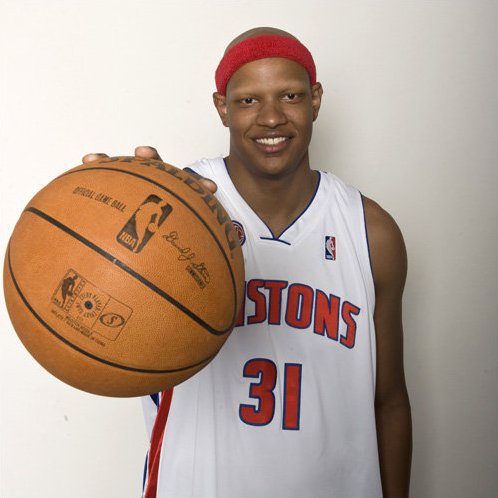 When the Pistons signed Charlie Villanueva this summer, fan expectation for his role was pretty clear. As a tall, long stretch four, Charlie would provide a logical, younger continuation of the role held by Rasheed Wallace for the last six years. While CV got off to a slow start due to a left hamstring injury, he's having the most efficient season of his career-- and one of the league's most effective post offenses.

Villanueva had big shoes to fill when signing with the Pistons this summer. His predecessor, Rasheed Wallace, was dominant on both ends of the floor, exemplified as the only player in league history to record 100 3's and 100 blocks in a season (four times over). While known for a nearly indefensible post game, Wallace had trended mostly to the perimeter in later years, preferring to snipe from the 3-point line instead of trading paint in the post.

Pistons fans grew weary of Wallace's preference for the three ball and his absense in the paint. Having watched Rasheed score at will from deep inside during the 2004 championship season, it was frustrating to see him ignore his greatest skill set for the better part of his Pistons tenure. Just how good was Rasheed Wallace as a Piston? Rasheed recorded his most efficient inside scoring season for the Pistons in 2004, where he shot 60.9% in the post on roughly 23% of his total attempts. Outside of the post, Rasheed shot 42.9% on the other 77% of his attempts.

Rasheed only spent 22 regular season games as a Piston that year. So how has Charlie Villanueva fared in a similar stretch this season?

In the 2009-10 season, Villanueva is shooting a blinding 68.3% from the post-- which accounts for 34% of his shot attempts. Thus far, this is better than anything Rasheed Wallace put up in a Pistons uniform... and even better than many of this league's superstar post players. Charlie is scoring so efficiently from close range that he is outperforming Dirk Nowitzki, Tim Duncan, Chris Bosh and Kevin Garnett in their career best seasons. Table 1, below shows a comparison between Villanueva and these players in their career best seasons from 2002, data courtesy 82games.com.

To put that in greater context, Charlie Villanueva's 68.3% would have outranked any other power forward in the game last season, with the next closest performance coming out of Amar'e Stoudemire with 65.8% inside shooting (note that Stoudemire spent much of his playing time at the 5).

It appears that Joe Dumars has discovered a one-of-a-kind post talent in Villanueva, a player whose market interest this summer was less-than-electrifying. Why credit Dumars with the discovery? Last season, Charlie's inside scoring was less-than-remarkable, converting at 53.4% while showing cause for serious concern on the other end of the floor. While Villanueva's primary season averages are not entirely different than last year, Dumars has once again shown the virtue of placing misunderstood talent in a situation where it can truly prosper.

Charlie vs. Rasheed: Creating and Receiving

If Charlie Villanueva is outperforming Rasheed Wallace's post offense as a Piston, why hasn't Charlie earned a reputation as a dominant post threat? Stats aside, basketball remains a visual game. Players make impressions on fans by the way they play, and Rasheed Wallace has shown both fans and the media that when he receives a pass in the low post, he's automatic. How many times have you seen Rasheed call for a pass, locked on his man within 7 feet of the basket? That turn-around, fall-away jumper is practically unstoppable.

Rasheed's talent, however, was as much about body control and positioning than it was about his release. Half of Rasheed's post genius was his ability to muscle himself into a position that created a clear passing lane to the ball. This is where he and Charlie differ the most-- in that Charlie has not yet learned how to lock on his man and create a risk-free passing lane to receive the ball. Take a look at Table 2, showing Rasheed's best season as a Piston and Charlie this year:

92% of Rasheed's inside shots were assisted, compared to just 52% for Villanueva. However, this is just as much a positive about Charlie as it is an area where he needs to improve his game. Charlie has shown a greater ability to receive the ball at the perimeter and slash to the basket. He scores so brilliantly in the post by creating for himself, by putting the ball on the floor and getting around his man. He can receive a pass and convert, but he's not afraid to create his own shot.

Making Use of Charlie's Inside Game

Detroit has two primary ways it can improve its use of Charlie V. First, Charlie needs to work with the coaching staff on how to muscle his man into position to create a clear passing lane to the ball. "Muscling" shouldn't be about strength and conditioning, as Charlie is about as cut this year as Wallace was as a Piston. Second, John Kuester should work to develop more plays that revolve around getting the ball to Villanueva within 10 feet of the basket. While Kuester has employed plays like this already this season, it's likely worth developing more to see just how far we can push Charlie's post game.

After 23 games played, the brilliant post play of Charlie Villanueva cannot be seen as a fluke. Should this be any indication of Charlie's future in Detroit, this signing by Joe Dumars could have been the top free agent acquisition of the summer. When the rest of the media and the league begins to pick up on Villanueva's dominance from the inside, it's only a matter of time before the double-teams begin. Last we checked, a dominant, scoring big who can draw a double team is the most difficult championship ingredient to acquire. That's not to say Villanueva is that type of player yet, but it's safe to assume that his peak is easily another year or two away.