The Pistons are, Without a Doubt, a Playoff Team

Share All sharing options for: The Pistons are, Without a Doubt, a Playoff Team

If you follow Charlie Villanueva on Twitter, like I do, then you're bound to get a nice dosage of Charlie V. This evening, @CV31 did one of his Twitter staples, #31Replies, where he takes time out of his day to answer 31 questions different fans tweet to him. It's just one of the many great things about athletes on Twitter who put themselves out there for the fans.

Question 29 was probably one of my favorites because a lot of people think the Pistons will be lucky to sneak into the playoffs, while others think the Pistons might be a middle of the pack type team in the Eastern Conference. Reading bottom to top, you have to LOVE the confidence Villanueva's response evokes about the Pistons' playoff chances: 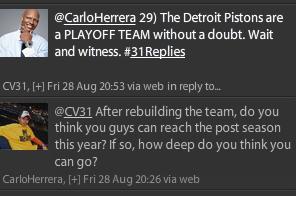 Of course you never want to hear a player say, "I don't like our chances of making the playoffs," but you definitely get the feeling that CV31 has high expectations, and I'm sure the rest of the team does, too.
Now, is his "wait and witness" comment potentially foreshadowing who the Pistons might knock out in next year's playoffs? What do you think are the chances the Pistons make it back to the Eastern Conference Finals?
Personally, this team is going to be very good and it's not even close to being a question of "if" the Pistons make the playoffs, but what seed they'll be. As Charlie V said in another response to a fan, it will all depend on the team's chemistry and rotation. Joe D stressed that he wanted to bring in good character guys who believe in the system, and it appears he has a great group of character guys who believe in the Pistons winning tradition. Beyond the players buying into the system and performing to their capabilities, it's then up to Coach Kuester in coming up with a rotation that works. The season is coming fast, so start getting excited -- if you weren't already.