NBA and Twitter: What Guidelines Should Be Put in Place?

As most of you already know, Twitter is becoming prevalent in sports. Currently, four of our beloved Pistons (Charlie Villanueva, Austin Daye, DaJuan Summers, and Jonas Jerebko) tweet as a way to bring their fans into their personal lives, allowing them to see what they are doing to ready themselves for the upcoming season or just what they are doing during their down time.

Recently, the NBA responded to the NFL's league wide guidelines for its players using Twitter by saying they would follow in their footsteps and also implement regulations. From what it sounds like, the NBA will emulate the NFL regulations and issue a ban on mid-game/halftime tweets and provide a grace period before and after games for when players would be allowed to tweet.

Of course, our favorite halftime tweeter, Charlie Villanueva, asked to hear the thoughts of his fans, and ultimately, wants Twitter nation to unite and make sure the NBA doesn't eliminate the usage of Twitter, but merely regulate it.

Being an avid user of Twitter myself, I gave CV31 my opinion on the matter, to which he responded (it reads bottom to top): 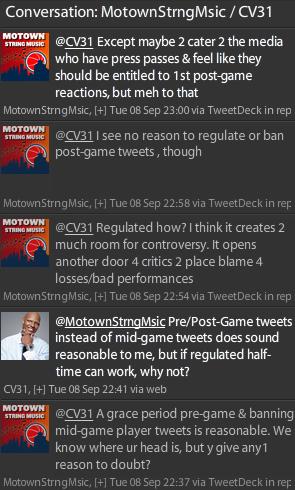 Excuse my Twitter grammar as 140-characters is tough to fully oblige with the English language. I think you're able to decipher what I mean, though. Basically, I understand the reasoning behind the NFL and NBA's guidelines. I believe mid-game tweeting from players is just asking for controversy. As I said above, one of the biggest concerns to me is that it could open the door to added criticism for losses and/or poor individual performances -- criticism that might not necessarily be fair regardless of any tweeting.

CV31 appears to agree with me in that pre-game and post-game tweets in place of mid-game tweets is reasonable, but also feels regulated half-time tweets can work. To that, I'd reiterate that I don't think any athlete should be tweeting between tip off and the final horn. As I said, it's just asking for unnecessary trouble.

With that being said, I don't want to downplay the importance of Twitter and how useful it is in connecting fans to the game and its players. It's a great resource for us fans and I definitely believe that it should exist in some fashion. I think David Stern realizes this, too.

Perhaps a team representative, a non-player of some sort, could tweet his observations within the locker room and/or from the sidelines between the start and finish of games. And then once that final horn sounds, I have no problem with a player getting back to his locker and tweeting his own thoughts and observations from his personal account.

No matter when an athlete tweets, they should be very careful with what they say because thousands of people are reading these public micro-blogs, so anything even remotely controversial could unnecessarily spiral out of control.

Back to the point at issue, assume Villanueva's half time tweet last season wasn't followed up by a terrific 2nd half performance and the Bucks wound up losing because Villanueva actually played poorly. Don't you think CV31 would be making himself vulnerable to added criticism because some people might think his mind during half time was on tweeting as opposed to getting mentally prepared for a grueling second half? After all, people thought that anyway! I understand where his head is at and would never dare question his mentality or heart, but don't you think it might create an easy target for someone who doesn't?

What do you think?

If you want to respond to Villanueva on Twitter, then by all means do so, because he wants to hear your thoughts. But please leave your thoughts here, too. I want to read what everyone thinks about the NBA and its inevitable Twitter policy. What kind of policy would you implement if you were Commissioner Stern?