Rodney Stuckey has quite a big year ahead of him. He'll be playing for a contract in 2010-11, and to finally put to bed the suggestion that he's not cut out to play the point in the NBA. While the 2009-10 season was a big step back for Stuckey, the environment he's stepping into this year should give him the tools he needs to prove his doubters wrong.

Having missed the original publishing date for this article, I'm running this one alone on a whim. A special thanks to Kevin, Packey and Matt for sharing their opinions throughout. This week, we'll feature one last post to look back at the player previews for 2010-11. For Jonas. 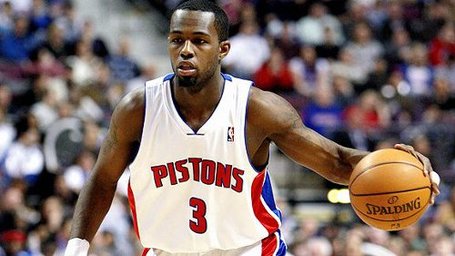 The knocks against Rodney Stuckey have been pretty clear. He's not a pure point guard, he's a shoot first and pass later type of player. Statistically, he's 64th amongst point guards in terms of assist ratio, and doesn't make up for the lack of distribution with efficient scoring. He's not a pure shooting guard, as he lacks the offensive toolkit necessary to be a reliable scorer. He's lodged between positions because, as I've quipped before, he needs control of the ball to score inefficiently.

The poor shooting efficiency is the most glaring issue, because if Stuckey were a 48% shooter we wouldn't even be having this conversation. There are players in this league who are as mechanically-challenged as Rodney (like Rajon Rondo) who are capable of 50% shooting because they stick to their strengths and defer when out-of-place. If Stuckey could do that alone, it might begin to silence his critics. The problem, however, is that Stuckey doesn't appear to have an offensive strength to stick to. He's a very poor finisher, which was supposedly his talent in the first place. 49% shooting at the hole puts you in friendly territory with the Duhons, the Brooks of the league, while most point guards convert between 54% and 60% at the hoop. Beyond that "strength", Stuckey doesn't really have much else to offer. Synergy Sports has Stuckey ranked at number 341 in the league in terms of offensive efficiency, with no stand-out type of play that he converts above average. 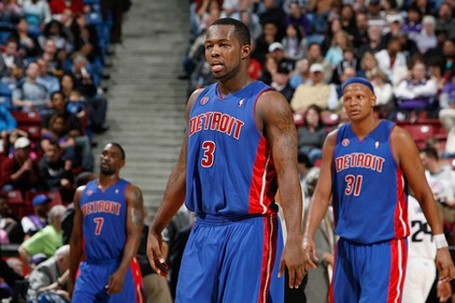 Sounds a bit dismal, doesn't it? In reality, it's not-- one could argue that the environment Stuckey faced last season was the absolute worst in the league. I'm not talking about the chemistry issues he faced during the Iverson debacle or the coaching changes he's seen in the last two seasons. Two primary environmental issues hung on Stuckey in 2009-10 that should not hamper him in the season ahead. Let's talk them out.

Rodney Stuckey started last season with a re-tooled backcourt that, including himself, featured four deadly scorers capable of 20 or 30 points on any given night. By mid-December, he was the only one of four left standing. Ben Gordon, Richard Hamilton and Will Bynum were all out with injuries by mid-December, leaving Rodney to carry the brunt of the scoring night-in, night-out. Rodney went from a role playing starting guard to the team's most important player in a span of 45 days-- and not because he earned it.

Rodney was effectively kicked upstairs, forced into a role he wasn't cut out to play. It is times like this where weaknesses in your game are amplified, and opposing teams scout them and prepare accordingly. If your offense is based on a few basic moves and you are the primary option in your team's offense, defenses can easily adjust and shut you down. The alternative for Rodney was to switch it up, to attempt shots outside of his comfort zone-- or else he'd force penetration when he shouldn't have.

This isn't giving Rodney a free pass on a bad season, but it does help to explain much of the dip in scoring efficiency. Rodney is not a very efficient offensive player to begin with, so if you put him in this situation he will effectively get worse. If the Pistons backcourt can stay healthy for the better part of the season ahead, Rodney should have a much more comfortable environment in which to operate-- and efficiently so.

Detroit's frontcourt offense was based almost exclusively on cuts to the basket and clean-up... and an injured Charlie Villanueva. As discussed above, its backcourt was largely injured, with players averaging career worst seasons alongside Stuck. Additionally, the team's 3-point shots just weren't falling. This left Stuckey with terrible options for the receipt of assists-- he could pass, but where would the ball end up?

Field a healthy team and add one more natural scorer to the frontcourt, and Stuckey could prove to be a better distributor. We're not talking Steve Nash here, but one could expect a significant improvement in assist numbers. If you make those changes, you field a healthy team and add another offensive-minded frontcourt player, don't be surprised if Rodney hits 6, even 7 assists per game on the year.

Oh, and those changes? They're done. Ben Gordon, Rip Hamilton and Charlie Villanueva all entered the preseason at full health, and the Pistons added Greg Monroe in the 2010 NBA draft. As much as these changes helped the Detroit Pistons, they will help Rodney Stuckey immensely.

This season, Rodney Stuckey should no longer be the first option on offense, which could improve both his efficiency and his passing. Fans could expect to see a return to the near 44% shooting he recorded in 2008-09, as well as an uptick in his assist numbers. He's already a great perimeter defender, and if these things come together he can show that he's a serviceable starter and deserves a new contract. If he has another year like he did in 2009-10, it might be time for Joe Dumars to finally move on.