Share All sharing options for: Pistons Drop Opener To Nets, 101-98

If you take out the final minute and forty seconds, the Pistons have a nice seven point win on the road to spoil the start of the Mikhail Prokhorov era. Unfortunately, NBA games are 48 minutes, not 46:20, despite me lobbying hard for a change to 46:20 games before the season started. In those pesky final hundred seconds, the Pistons shot 1-5 and were outscored 13-3. Ball game. Nets win. In Russian that's Я не знаю. Good for the Nets for picking up their first win before December... 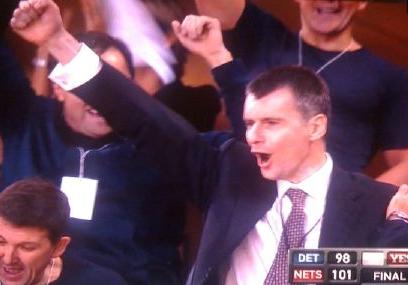 Obviously, these are not your same ol' Nets. They could win three times as many games this year as they did in 2009-2010, so I'm not too bent out of shape about the Pistons losing to the Nets. It's more about how they lost to the Nets.

We can start with the third quarter collapse, which was an annoying theme at the beginning of last season. The Nets outscored the Pistons 31-20 in the third behind Brooke Lopez's 12 points and Devin Harris' nine points. 31 points normally isn't the worst, but it's unacceptable considering it was opposite 20 and the Pistons gave up just 39 points in the entire first half. The better teams will take that kind of sleep-walking out of the locker room and run the Pistons six feet under.

Despite the piss-poor third quarter, the Pistons bounced back in the fourth and, as I mentioned earlier, had a seven point lead with under two minutes remaining. In fact, the Pistons built up a ten point lead half way through the quarter, enticing the Nets' announcers to suggest, "the Pistons are running away with this," but Detroit couldn't find a way to say "I will crush her."

No doubt, this is a very frustrating, and disappointing, loss to open the season, but -- to steal a quote from the Heat's best player -- this is one of 82. In this one, there are plenty of positives to take away.

I'd say I was about an 11 out of 10 on the excitement scale for the season to start and, after this loss, I'm still a 10.99 out of 10. The Pistons team I saw out there tonight is not a less-than-30-wins team, which is kind of sad to say, but it's still an improvement upon last year.

More in depth stats and random musings after the jump.

I said I was going to try something new and look at the different lineups Kuester puts on the floor each game, so here's what I compiled in regards to that for game one:

Kuester used 12 (!!) different lineups, albeit a few of them were used for less than a minute or two. The best in the first half, in terms of plus-minus, was Wallace, Villanueva, Prince, Stuckey and Hamilton (last year's starting lineup, if I'm not mistaken). They outscored the Nets 9-2 in the final 2:50 of the half. That was the only time these exact five were on the floor together. (Why?)

The best lineup overall, which saw the second most time for one unit, was ... Maxiell, Villanueva, McGrady, Bynum and Gordon. I know, I had to look at that twice, too. They played 13:45 together (all of McGrady's minutes) and were a plus-nine with a 34-25 difference. McGrady missed his only three shots, but he had two steals, a couple rebounds, and four assists (I'm adding one to his total because Maxiell missed a wide open dunk on McGrady's best look, and he could've had a couple others, too, if it weren't for Mad Max being Bad Max). Overall, meh, but I'm not complaining considering he cost us nothing and he missed all but six minutes of the preseason.

Looking at the overall plus-minuses, CV's team-best plus-11 was a result of him being a part of the two best units for the game. He had a pretty strong game, although it'd be nice if he rebounded more. To be fair there, he was with Wallace and Maxiell most of the game, and those two cleaned up, relatively speaking (16 of Detroit's 37).

In the final four and a half minutes, Kuester used a Prince, Hamilton, Stuckey and Gordon quartet, which, to me, indicates that these are his initial closers. He was shuffling CV, Wallace, and Max in-and-out because the Nets started playing Hack-A-Ben. Surprisingly, the Maxiell, Prince, Hamilton, Stuckey and Gordon five that played for 2:21 outscored the Nets 7-4 and had the lead up to seven with a 1:40 left before Kuester brought Wallace back in, which is fine because Wallace is better defensively. Unfortunately, that's when the Nets went on their 11-0 run.

If you want to know anything else about the lineups, I have a plethora of notes, but it's late ...