Ben Wallace has played great defense on the court of basketball his entire career and, when his playing days are over, he plans to take that Hall-of-Fame defense to a different kind of court: the court of law.

Wallace is currently researching law schools and talking to lawyers in his offseason hometown in Richmond, VA with the hopes to actively pursue a law degree when he retires from basketball:

"That’s my ultimate goal," Wallace said. "It’s always been one of my dreams. I think I can argue a pretty good case. I think I can convince a couple of people to see things my way.

I’m very serious about it. Very."

I can't imagine representing the plaintiff and looking to my left to see this man defending the case: 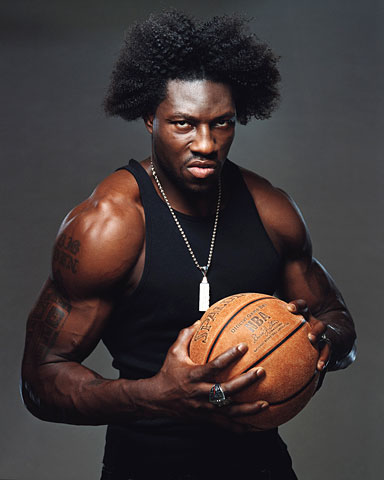 Before Wallace even asks a question on cross-examination, I'd probably object. On what grounds? He's badgering the witness, your honor. But he hasn't even asked a question yet. His biceps, your honor. Objections? Ben Wallace doesn't object, he blocks the shit out of your crappy arguments and steals your good ones. You want to charge his client? He'll stand there and take it (in front of the half circle, of course).

And don't believe for one second that he won't rock the 'fro in the courthouse. In fact, we've already seen the Ben Wallace afro in court. Ben Wallace might be the first defense attorney in the history of jurisprudence to win a case by simply staring at the jury or judge like he is in the above photo.

When he wins (not if), I imagine his celebration will be something like this, but a lot less funny and a lot more scary:

Thanks to Trout Jefferson for the FanShot earlier.