The circus is back in town: Lakers @ Pistons [Game Thread]

Share All sharing options for: The circus is back in town: Lakers @ Pistons [Game Thread] 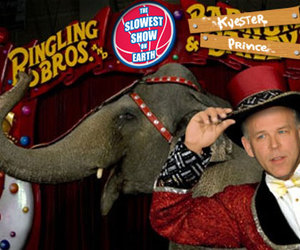 The Lakers started the season en fuego, winning their first eight, but have lost two of their last three and enter The Palace on Wednesday night playing the second of a roadie back-to-back. If the Pistons are to beat the defending champs, this is a very good opportunity. /end rainbows

There's a reason why the Lakers are back-to-back champs. They are first in scoring, they are second in rebounding, and third in assists. In addition, they are one of the two teams ahead of the Pistons in 3P%, shooting 43% from downtown, thanks in large part to former Michigan State Spartan Shannon Brown (51%) and free agent signee Steve Dewey Blake (52%).

In the end, the biggest pieces on the Lakers are Kobe Bryant and Pau Gasol, who continue to dominate the rest of the NBA.

Keys to the game:

Pick up the pace: The Lakers two losses come at the expense of two of the fastest teams in the league (Nuggets and Suns). The Pistons have the ability to score and probably won't be able to stop the Lakers well oiled machine, so they might as well try to pick it up and outscore them.

Move the ball around: Don't play like the strangers. By picking up the pace, the Pistons will be forced to move it around, but they need to distribute the ball regardless.

Don't fight each other: These public spats are getting tired.

Question of the game:

What could possibly go wrong tonight that hasn't already happened this season?

Photoshop is via buddy Mike Vitiello. You can follow him @Mickeyvee