Share All sharing options for: Hooray! The Pistons Aren't The Worst: Pistons 108, Timberwolves 85

The best recipe for a W: home game after a nice break, great offense, solid second half defense, and playing one of the worst teams in the NBA (usually) equals sweet, yummy, success.

The Pistons were constantly making that one extra pass on offense to create the easiest shot opportunity, which was why the Pistons had 60 points in the paint and "at least 13-to-15 dunks" (Kelser's words) -- and some of the dunks would have scored higher than what we saw this past Saturday.

There were also Daye, Kwame, and Wilcox sightings - each seeing at least five minutes in the fourth.

Ball movement FTGDMFW. 37 (!) team assists allowed the Pistons to get open looks and shoot 54% for the game. Will Bynum dished out a career high 14. 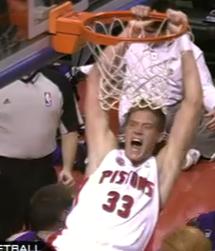 This man set the tone early (maybe I should use this picture whenever I really want to emphasize how awesome he is/was). He scored 13 points in the first quarter and it probably would have been more if it weren't for foul trouble. He still finished with a team-high 21 points on 9-13 shooting, three rebounds, and two steals.

Speaking of threes, Charlie V was just 1-6 from downtown -- a nice portion of the reason why the Pistons were just 22% as a team from beyond the arc. When he and Ben Gordon were on the floor together, I saw more set plays for CV behind the arc than BG. That should never happen.

Tayshaun Prince played a team-high 31 minutes and made the most of every single minute. He was a team-best plus-34 in plus-minus (according to ESPN), had 11 points on 5-8 shooting, grabbed five rebounds, and had three assists. He's averaging 17 points and 4+ rebounds over the last three games -- perfect timing because there's a certain deadline on Thursday at 3 PM EST.

Will Bynum career high in assists was a little on the quiet side, too.

The Timberwolves are the worst team in the Western Conference, but there's no denying how well the Pistons played on the offensive side of the ball tonight. They moved the ball tremendously well and were actually executing set plays on a consistent basis. 37 assists and 54% shooting is going to give any team a pretty good chance at winning, especially against the Timberwolves.

I guess we'll see if this was more a product of the T-Wolves being in town or the Pistons actually playing better together after the All-Star break, when the Pistons travel to Orlando for a game with the Magic tomorrow night. /Sigh.

Any way you want to look at the season, these wins are nice because at least we know the Pistons don't need to climb out from the very bottom of the pits of bad.