Share All sharing options for: That Was Better, But Still Not Good Enough: Cavs 113, Pistons 101

Well, that ended as the game thread title implied. Detroit actually found effort on their flight home from Boston last night, but unfortunately, it wasn't enough to beat the beasts of the East (and their friends with whistles).

Six Pistons scored in double figures, the team shot 64% from three-point range, and the game was tied at 94 apiece with 4:44 left in the fourth quarter. Then the Cavs finished on a 19-7 run.

Listen, I could hammer out monotonous drivel about what happened and why the Pistons fell apart late (and bicker a lot about the refs, which is usually not my thing), but that would be no fun for anyone -- we all get it, the Pistons are 23-45 and, in words, 'not good.'

Instead, let's have some fun. I've been lurking the comments on DBB for years and I know you're all smart, creative, and funny people. When I came across these two pictures (LeBron from NBA.com & Kuester from within SB Nation's system), I instantly wondered what kind of reaction they would get from the DBB community. So in lieu of a traditional recap, I ask for your captions for these two pictures (below). LeBron screaming like a school girl, and Kuester about to sneeze his face off. Those are the elementary interpretations, at least. Let's hear story lines, Haikus, etc. Maybe best one as voted by your peers will win something? Recap privileges for Friday and/or Sunday's game(s), perhaps? Have at it. 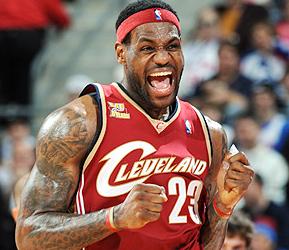 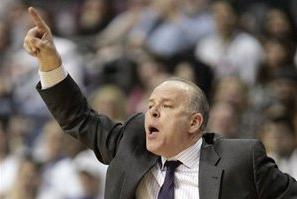