The Hope for Greg Monroe

Share All sharing options for: The Hope for Greg Monroe

With the 7th pick in the 2010 NBA Draft, the Detroit Pistons selected Greg Monroe from Georgetown University. In a draft full of talented big men, Monroe fell into Detroit's hands and the pick was made by Joe Dumars himself. Collectively, the community here at DetroitBadBoys were teased with last second trade rumors that might net us DeMarcus Cousins, but the draft is done and the trade line has gone quiet. While not everyone is happy about it, Greg Monroe is now a Piston-- and the future of our frontcourt. 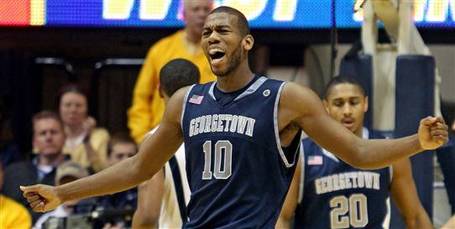 So just how good can Greg Monroe be for the Pistons organization? Let's rub the crystal ball and find out.

Always the pessimist, I find it important to get the negatives out of the way first. This is what Greg Monroe will likely never be: a respected defender, a shot blocker, an offensive rebounder, a solid ball-handler or a sure-thing shooter. Save for the shooting, these are all terribly important needs in a center, and while Monroe may have the size to body up on many NBA centers, his questionable post and man-to-man defense could present a problem for the Pistons on the defensive end. There's no reason he can't improve on that side of the court, but the body of work he has established suggests that we will see a step back in how our team defends not only centers, but driving guards and slashing forwards.

Greg Monroe has developed a basketball IQ the likes of which an NBA draft has not seen in many years. While a player like DeMarcus Cousins has a tremendous instinct on the court and un-relenting physicality, Greg Monroe appears to be a calculated, educated player whose game is based on an understanding of body control, offensive mechanics and court awareness. It is on this playing style that Monroe excelled in Georgetown's Princeton Offense, becoming the anchor of a team's scoring in the post that could score facing the basket and dish to cutting forwards and guards parked on the perimeter.

Monroe's basketball IQ is something that demands a deeper understanding. If he can adapt to the Princeton Offense and excel, he is an instantly coachable asset-- a player whom a coach can focus on as the center of an offense and trust that the play will be executed properly. This may sound elementary, but it is terribly important to understand just how valuable this is to a team.

Offensively, Monroe can score in the high post, maneuver in the low post and stretch to 25 feet and knock down a jumper. While he may not get his hands dirty under the basket and fight for a tip in as hard as he should, Monroe has range and post skills right out-of-the-box. Again, while you want your center to get dirty in the paint, Monroe can handle the job description of the modern NBA center, where versatility has become paramount. Center versatility hasn't won a championship yet, but the trends are moving in that direction.

Last, and most popularly, the guy can pass. 4.4 assists per game is ridiculous for a center, but note the baggage of 3.8 turnovers per game. Turnovers are another major weakness for Monroe, and he hasn't exhibited the level of production to warrant those turnovers, where a player like Howard or Wade can get away with it. If you can score efficiently and defend well (Howard) or you can carry a lottery team to the playoffs on your back (Wade), you can get away with turnovers like that. But hey, this is the "positives" section, so let's stick to that, yeah?

The Pistons won 27 games last year. I don't think you need to be reminded of that. However, if you're like me (a perennial 82-game-a-year Pistons watcher), it was a FIGHT to maintain interest in games down the stretch. In 2007, you might have said to your girl (or Jonas, in Kriz's case): "no YOU don't understand, I HAVE to watch this GAME. Tell Steve and Megan they can SUCK our dinner plans". In 2010? Not so much. So what can we expect for 2010-11 with Greg Monroe at the pivot?

Highlights. No-look post passes that will have you yelling "DID YOU SEE THAT!!??" at your girlfriend's cat. Twisting, reversed high-post maneuvers that will force you to rewind your tivo. Fifteen foot jumpers that will not even flirt with metal, only string. In short, Greg Monroe alone will make this coming season so ultimately watchable that you can stop that argument in your head about whether or not you should renew League Pass. Book it, you're in for a MFing treat.

On the other end of the court, you're also in for a style of Pistons play that might seem entirely alien to you. If you hated Charlie Villanueva's defense this season, get ready for more like that. Monroe as our center forces this team to run-and-gun, because our last two major frontcourt investments show little semblance of a respectable defense. If our starting frontcourt includes Villanueva at the 4 and Monroe at the 5, we might as well change the Pistons jerseys to bikinis on those nights. Manhandled, we very well may be.

As I said above, Greg Monroe could very well surprise people with a focus on developing his defensive game. If he has the IQ to play the central part of the Princeton Offense, he might show the interest and intellect needed to develop into a decent defender, at the very least.

In short, Pistons fans should expect electrifying offensive plays with Monroe at the 5. But Detroit better get used to forgetting about the lock-down defense which has been our brand for so many years. Joe's two major maneuvers in frontcourt additions, for the last two seasons, suggest a serious departure from that identity. While the offensive highlights may be exciting, the drop in defense may be unbearable for some.

In college, at the University of Florida, David Lee closed his season with averages of 13.6 points on 52.5% shooting, 9 rebounds, 2.2 assists and 0.8 blocks in 28 minutes per game. In pace adjusted per-40, these numbers were slightly better than Monroe, albeit with slightly less blocks, steals and assists, and nearly equivalent turnovers. With six more minutes per game, Monroe averaged 16.1 points on 52.5% shooting, 9.6 rebounds, 3.8 assists and 1.5 blocks. The comparison is strikingly similar, with both averaging precisely the same shooting percentage and free throws attempted per pace-adjusted-40, with Lee grabbing another rebound-and-a-half per game.

The difference between David Lee and Greg Monroe is that Monroe already has a developed offensive game out-of-the-box. Lee earned a slight scoring edge in college by grabbing more offensive boards, yet exhibited zero outside shot prior to the NBA. Today, however, Lee has a respectable jump shot from 20 feet, a stretched game that has made him an entirely better player in the NBA.

With David Lee recording 20.2 points on 54.5% shooting, 11.7 rebounds, 3.6 assists and half-a-block a game, it's not out-of-the-question to expect something similar out of Monroe. If Monroe earns the same 15.5 attempts a game, 18 points should be within reach, given that Lee had shown a better touch from the free throw line. Since he's not an equivalent offensive rebounder to David Lee, 8 rebounds per game would be a solid expected ceiling. They can both pass, which drives this comparison, and neither can be expected to block shots and defend effectively.

Greg Monroe could project to be not a "poor man's David Lee", but the dentist to David Lee's doctor. If Greg Monroe finds himself with 37 minutes per game, 18, 8 and 4 is an entirely possible ceiling for a player of his talent, IQ and physical ability. Before the stat-heads rip my head off, I must repeat that this is the absolute best-case scenario. The comparison to Lee is especially relevant, in that Lee is not a respected defender, a career point which Monroe is expected to fulfill.

In the SB Nation mock draft for 2010, I suggested DBB select Cole Aldrich with the 7th pick. I think Aldrich has the drive, size and skill to be a solid player in the NBA. But Monroe was not on the board when I made my suggestion. Monroe is a deeply gifted player, but carries many weaknesses in his game. Detroit Defense will not be our calling card with a Villanueva/Monroe frontcourt, but if John Kuester can plan accordingly we could be in for an entirely exciting brand of fast-paced, fast-pass basketball. Kuester was hired as an offensive playbook genius, and you have to bet that man is salivating right now with the opportunities involving Monroe.

As both a stat-head and a pessimist, I'm well aware of the negatives hanging on this man's shoulders. It's entirely possible that through bad defense and turnovers, Monroe might present empty production on court-- but that is not yet set in stone. I welcome Greg Monroe as Detroit's newest player, and the future of the Pistons' frontcourt. Let's see what you've got, young fella... it's your time to step up.

For some reason, I have real, tangible faith that you're going to give it your all.