Jarrett Jack isn't the flashiest Point Guard in the Association. He does make the highlight reel on occasion - just ask My Friend Will Bynum or Charlie V. Generally speaking, Jack simply plays fundamentally-sound basketball. At 26 with five full seasons under his belt, he's the oldest and most experienced of the Point Guards we've examined, but that also means his head is probably bumping up against its proverbial ceiling. That's not necessarily a bad thing. Twenty-six isn't old by any stretch. Jack has just entered the prime of his career, and given that his game (as I observe it anyway) depends about as much on craftiness and smarts as athleticism, it's safe to say Jack will remain a productive point guard for several years to come.

I've tried to find a more creative way to say it, but I just can't come up with one. Jarrett Jack is simply a solid player. Although he's certainly capable of bringing the crowd to its feet, most nights he won't blow you away with his athleticism. He's more likely to make SportsCenter's Top Ten by starting rather than finishing an alley-oop. Plus, his numbers don't really jump off the stat sheet, at least if you're not looking closely.

Yet, Jack is a very effective player. He's not a volume scorer, but he scores his points very efficiently. And as we'll see in just a moment, he scores often and efficiently in the two places our team needs point guard scoring -- in the paint and beyond the arc. The numbers we'll look at seem to support what I've observed of his play: he is aware of both his strengths and his limits on the offensive side of the ball, and he plays to his strengths very well. He doesn't seem to force shots when they aren't there, as is evidenced by his superb shooting percentages. His career assists numbers aren't staggering, but he is coming off the best season of his career in that regard, averaging 5 assists in 27 minutes (and a 27.7% assist rate). His 2.6 turnovers per game are respectable -- not great, but certainly not bad.

Finally, he's paid appropriately relative to his production. He is owed $15,000,000 over the next three seasons, or in other words, just under what a full Mid Level Exception contract will look like this summer. He's not a star, but he's a legitimate starting PG whose strengths mesh well with our needs.

The main weakness I see with Jack is this: he's very close to his ceiling if he's not there already. Last year, he posted career bests relative to assists and true shooting percentage, and that's certainly encouraging. However, they weren't dramatic increases, and I'm not sure he's guaranteed to sustain that level of play. What you see is what you get.

Beyond that, there are three other issues (more on all of these below). First, he may not pose a significant upgrade as a distributor. Second, he doesn't get to the free throw line as often as I would hope. Third, he may not be a good fit on the defensive side of the ball.

In Portland, Indiana, and Toronto, Jack was shuffled in and out of the starting lineup. Much like Ben Gordon throughout his career, Jack seems well-equipped for either role. However, in 2009-2010, Jack played some of the best basketball of his career as a starter for the Toronto Raptors. The table below illustrates Jack's effectiveness in 09-10 as a starter vs. a reserve (represented as averages per game).

What is most remarkable is Jack's shooting efficiency, especially as a starter. Jack posted a remarkable .643 TS% as a starter (.599 on the season), a very high number for a PG. Not only is his overall shooting efficiency very good for a PG, he excels at scoring the basketball in the paint and beyond the arc -- something we Pistons fans have been hoping for out of Rodney Stuckey for the past two seasons. Below is his "Hot Spots" chart, taken from NBA.com. Nearly 67% of Jack's shot attempts were taken in the paint or from beyond the arc (37% and 30%, respectively), and as the colors make obvious, he's a very good shooter from both ranges. 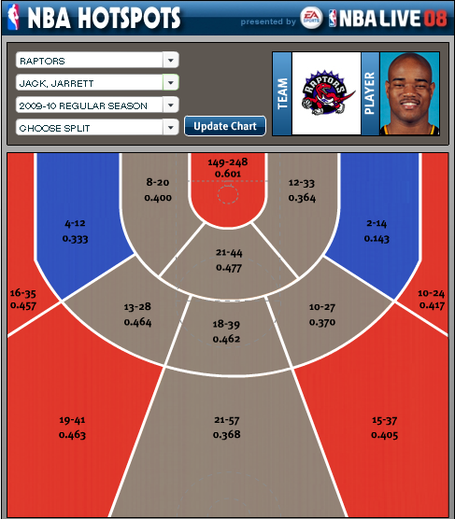 As I mentioned, he assisted at a higher rate in 2009-2010 than he ever has prior. If this improvement is a lasting improvement, then Jack presents an upgrade over Stuckey as a distributor. While that may be possible, it's not a guarantee. The worst case scenario, though, is that Jack is a lateral move in this department.

So in terms of scoring efficiency, Jack is a significant upgrade. In terms of distribution, he may present an upgrade. But beyond that, does he fit with the Pistons? I am going to consider this question through several different questions that have been topics of conversation on DBB throughout this season. I'm sure I'm missing something. Let us know in the comments.

Can he get to and finish at the rim? Yes, as the shot chart above makes perfectly clear. As we all know, both Stuckey and Bynum get to the rim frequently but struggle to finish consistently. Additionally, attacking the basket has been a problem for the Pistons for several years. I'm not touting Jack as the definitive answer to this problem, but he could help.

Can he get to the free throw line? Unfortunately, Jack doesn't get to the line as frequently as one might expect given how many shots he takes (and makes) near the rim. In fact, he takes fewer free throws per 36 than Stuckey, and I think most of us agree that Stuckey should be shooting more free throws. However, I'm inclined to think that Jack's full 60% shooting vs. Stuckey's 46% shooting at the rim mitigates this quite a bit.

Can he score from the perimeter? Yes, as the shot chart above makes perfectly clear. Of the PGs we've considered, only Collison has a better career average (in one season), but the 41.2% that Jack posted 2009-2010 is better than any other single season posted by these four players. (Sessions shot 3-7 in 17 games as a rookie, however).

Can he get his teammates involved in the offense? As noted above, Jack's career assist numbers are respectable and are very similar to Stuckey's. So on first glance, he doesn't appear to be a sigificant upgrade in that department. However, he did average a career best 6.6 assists per 36 last season, roughly 1.5 assists more than Stuckey, and posted a 27.7% assist rate. That's not quite as good as Collison or Sessions, but it is a significant improvement over Stuckey. Additionally, his usage rate is the lowest of the guards we are considering, indicating that he scores and assists his teammates without wasting possessions.

Can he defend both positions? At a 6'3" 200 lb., Ben Gordon is often physically outmatched against bigger SGs. As a result, we often saw Ben Gordon defending opposing PGs and Rodney Stuckey defending opposing SGs. At 6'3" 202 lbs., Jarrett Jack doesn't appear to be any more suited to the task than Gordon. If you followed the Raptors this season, the disgust expressed by fans and media alike over the often-used Calderon-Jack backcourt will be familiar to you. If not, let me recommend our SBNation friends over at RaptorsHQ. To summarize, that backcourt combination simply didn't work, and one of the reasons was defense. For the stat heads among us, the Counterpart Production data from 82games.com seems to support the notion that Jack shouldn't be defending SGs. So unfortunately, the answer to this question appears to be no. The data also suggests that Jack's not a lock-down defender at PG either.

That said, I think there are two reasons why this shouldn't dissuade us from pursuing a player like Jack. First, I think any perimeter defender looks better when backed up by solid interior defense. Presumably, solid (or at least improved) interior defense is part of our team's future. Second, concern over whether or not a PG can defend opposing SGs should not win out over concern over that PG's over play as a point guard. That type of size and strength should be viewed as a bonus, not a requirement.

Are the Raptors looking to move him? It appears that Toronto is looking to move either Calderon or Jack. Again, I refer you to RaptorsHQ for parts one and two of their analysis of Colangelo's post-season press conference. It would seem that Jack's contract would be much easier to move, but I suspect Bosh's future plans will impact any future moves by the Raptors.

Do the Pistons have anything the Raptors want? My guess is no. Then again, things could change drastically if Bosh leaves. Plus, that doesn't mean we can't speculate wildly. What else are we going to do, watch L.A. vs. Boston?

(A statistical comparison of Stuckey, Collison, Sessions, and Jack can be found here.)

Thanks to Mike Payne and Bearded Thundar, we all have firm grasps of what Collison and Sessions are capable of and why they make sense for the Pistons. Argubaly, Collison is already the most productive of the group and clearly has the highest ceiling. But, he's probably the most expensive, if he's available at all. Sessions probably has the second-highest ceiling of the bunch, is probably the lowest risk - highest reward option. He may be the best overall fit with the roster, and Minnesota may be a natural trading partner.

Jack is the veteran of the group. He's also low-risk, given his production relative to his contract, but the reward isn't as great. His specialities - scoring efficiently in the paint and from beyond the arc - directly address team needs. But, his defense is a bit of a question, and he's not a pure distributor. Still, as a secondary move after the frontcourt has been rebuilt, Jack would be a player well worth considering.