Here's an interesting thought-- if Rip Hamilton and Tayshaun Prince are traded this season, Jason Maxiell will be the longest-standing Piston on this roster. Yet in his five years in Detroit, he's never amounted to more than a temporary starter, a roster afterthought that seems to be firmly cemented in role player purgatory. This is no fault of Jason's, however, as when he is given the burn, the man delivers. The question we should be asking-- will there be enough burn for Jason to get hot in 2010-11? Kevin and I take a look at that question after the jump. 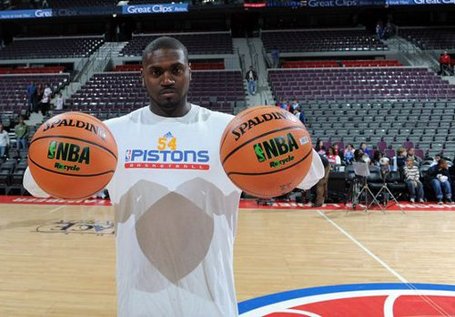 Mike Payne: Maxiell was Magnificent last March. The man averaged 10 points, 9 rebounds and a block in 15 games that month, recording 28 minutes per game. Jason started all but one game in March, recording six double-doubles in a span that silenced those that were critical of his apparent lack of production. Sadly, the energy frontcourt of Maxiell at center and Jerebko at PF only yielded 2 wins that month, as the team's frontcourt offense had a lot more to do with cleanup than it did with go-to scoring. March was pretty indicative of what fans can expect out of Maxiell-- tenacity, energy, rebounding and a hunger for babies. As the season wore on, he only got better-- and if that trend continues, Jason Maxiell could have a lot to provide to a Pistons team with remaining frontcourt issues in 2010-11.

That said, he has the "potential" to provide a lot to this team next season, but who knows if he'll get the burn to put up numbers. He may get significant minutes out-of-position at the 5, but he's got heaps of competition for playing-time at the 4. He'll be rubbing elbows with Greg Monroe, Charlie Villanueva, Jonas Jerebko and The Mighty Chris Wilcox-- so it's not easy to pencil him in for consistent minutes until the pre-season is behind us. Sadly, if you've been paying attention to Jason's career, he's not so hot when consistent minutes are not available.

The thing about Jason-- he's the type of player that gets better the more minutes you give him. If he's paired with an offensively-minded frontcourt player that's not a wash on defense (Greg Monroe at the 4 being an optimal pairing), he deserves to earn solid minutes in 2010-11. Deserving or not, those "solid minutes" don't feel likely...

Kevin Sawyer: Maxiell was arguably the Pistons' most effective big man on a per minute basis during the '07-'08 and '08-'09 seasons (16.3 PER, .158 wp48). For his efforts, he was rewarded with sporadic minutes during the first half of last season, to which he responded with sporadic results.

On a team with no interior offensive presence to speak of, it is passing strange to see a player of Maxiell's talents ride the pine. Coach Keuster must have thought it was strange, too, since he inserted Maxiell into the starting lineup. Maxiell responded with a string of double-doubles, and a strong finish to an otherwise forgettable season. Maxiell's shortcomings reside on defense. His effective work against Dwight Howard in the playoffs aside, it is clear that his lack of size will limit his effectiveness at this end of the court. Nonetheless, he was one of the team's best rebounders and was also one of the best shot blockers before Ben Wallace returned.

As is often the case with players who dunk a lot, it is possible that his reputation as an "energy guy" does him a disservice. In many instances, his minutes were limited to those times when the team needed a change of pace. Other times, he has been taken out in spite of having the hot hand. I think the whole "energy guy" thing is a myth. Either a player is effective, or he is not. Whatever his role, when given consistent minutes, Jason Maxiell is an above average big man. If he can get a consistent 20-25 mpg, he should revert to his usual high standard of play.

Your turn, DBB. Will the playing time be available for Jason to heat it up again?