The draft of Greg Monroe marks the end of a long five years since Joe Dumars drafted a big man. After a flurry of 2-guards and combo forwards, Joe used his 7th pick in the 2010 draft to select what could be one of the most talented, high IQ bigs in recent history. The question is whether or not that talent, that IQ will translate to the pros. Let's ask that question, shall we? 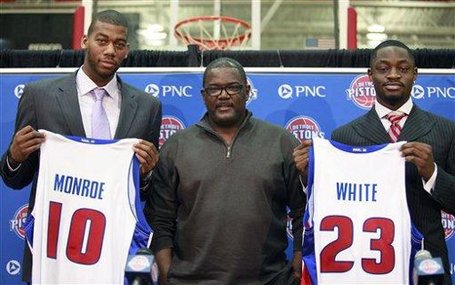 Kevin Sawyer: In many respects, Greg Monroe is a bit of an enigma. He certainly has the size to be a potent big man in the NBA, but his game is a bit more, um, European?

So let's get it out of the way. Monroe was not an outstanding rebounder in college, but he was an excellent passer. Depending on your perspective, that makes him the next Chris Webber, or the next Andrea Bargnani. Is he a classic big whose massive toolkit was put to use in Georgetown's unorthodox system, or a softy who required said system to thrive?

By my lights, his passing skills will be useful in an offense where virtually every player posted a worse offensive season than the year prior. Valid concerns about conditioning aside, he can run the floor, and showed some nice low post moves in summer league. If he can be a low post threat, through whom the Pistons can run the offense in certain sets, he'll quickly make his presence known. My guess, given his age and his motor, is that it will take some time for him to find the minutes to do so.

Add to this the fact that the Pistons always seem to have a logjam at every position (albeit a logjam of failure), so fans will need to wait a bit to see his full potential. I'm on the record regarding Monroe's talent, and the Pistons desperately need a low post scoring threat, so I'm willing to be patient. 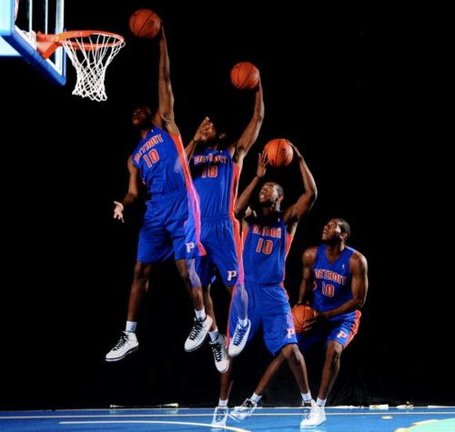 Mike Payne: Let's take a chug of the kool-aid, shall we? It's quite possible that Monroe ends up a better pro than he was a college player. Logically, some of his weaknesses should iron themselves out now that he's out of the Princeton offense, and no longer his team's primary option. Specifically, we should see a lower turnover rate, better shooting efficiency and a slight uptick in rebounding rate. At Georgetown, Monroe operated out of the high post, where rebounds are harder to come by. As the Hoya's primary scorer and distributor, forced shots and bad passes certainly serve to stink up your numbers. I'm not suggesting a major turnaround for Monroe, only to say that going from the 1st to the 3rd option on the floor might make him a more efficient player.

Of course, the first thing Monroe will have to overcome is the adjustment to NBA-level defenses. His offensive game does have a few pretty glaring weaknesses that could be easy to exploit (his inability to go right in isolation, for example). According to Pistons.com, he's already begun learning just how capable NBA defenders are, thanks to our own Ben Wallace. It'll certainly take time to adjust, but these adjustments from college to the NBA are where Greg Monroe's oft-touted basketball IQ will serve him the most.

Speaking of defense, Monroe carries a question mark in his ability to defend at the next level. He was a poor perimeter defender at Georgetown, and his shot blocking leaves plenty to be desired. That said, the man will not be a wash on defense. He improved his defense over time at Georgetown, and his mix of size, length and IQ should serve to make him a decent to good defender in most match-ups, especially when properly paired in a team defense. On man, don't expect Monroe to back down in the post, as he'll do his best to maintain position and force bad shots as he did his sophomore year at Georgetown. However, concerns about his mobility on the perimeter and issues with isolation plays need to be addressed-- in training and/or defensive pairings on the court.

All this aside, how much playing time will Monroe see in his rookie season? While he'll likely begin the season off the bench, don't be surprised if he winds up a starter this season. He's one of two scoring bigs on the Pistons roster-- and the other one doesn't play a lick of defense. For a player like Monroe, it'll all come down to that defense. If he can hold his own on the floor and grow as a defender, he'll be shooting up the pecking order and fast. If Monroe asserts himself, it won't be long before he's the first big off the bench and not long later until he's made a starter.

I think the most reasonable expectation for Pistons fans in 2010-11 is to leave the season feeling like Joe Dumars made the right pick. After all, we could be talking about Al Farouq Aminu or Ekpe Udoh right now. I don't think I need to tell you how I would feel about that.