When Joe Dumars bemoaned a lack of toughness within the 2009-10 Detroit Pistons, he was clearly not referring to Will Bynum. MFWB exploded into last season, picking right up where he left off the season before. Sadly, an injury derailed his game and the result was certainly not the Will Bynum we have come to know and love. Going into 2010-11, Bynum is now healthy, hungry and carrying a nice new contract that'll lock up the rest of his 20s. If the injury bug doesn't nip again, just what can we expect out of Will Bynum in the season ahead? 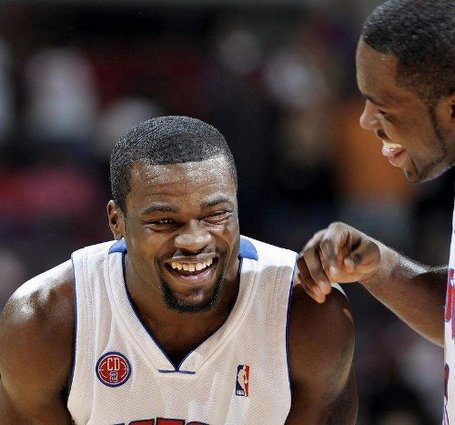 Brian Packey: It's all too common in sports that we see athletes grind it out for a contract and, once they collect, they become complacent and a shell of their former selves. Before you skip straight to the comments to defend Will Bynum, relax; I'm not saying that's going to be him. In fact, I want to stress that Bynum is probably the last leaguer to take anything for granted -- he's been through way too much to get to this point and do that. Given everything I've read, he's been working even harder to prove he deserves the three-year deal he signed this offseason.

Bynum has made it clear that he wants to start and he intends to make the decision tough on Coach Kuester. Of course, as we all know, Bynum's role is contingent on Rodney Stuckey's. The whole Bynum v. Stuckey debate is the Pistons fans' (macho) version of Twilight's Team Edward vs. Team Jacob (I have a 14-year-old niece, okay?).

Personally, I'd be happy with either one and the two could generally be interchangeable. That says a lot about the depth at their position (I'm talking about Bynum and Stuckey, sheesh).

The key for Bynum to have an argument for a starter's role is to get back to the way he played in 2008-2009, though. Last season, he saw an increase in minutes, but everything, including his health, diminished. The drop off could've been a result of the added minutes, injuries, or even both, but Bynum needs to prove he can stay healthy and produce when seeing starter's minutes. Until he can prove that, he's nothing more than a spark plug off the bench (a very good one at that)

In addition, it wouldn't hurt if he improved upon his 21% shooting from 3-point range. Don't you worry, though, he's been working very hard on it (note: if he's truly been "making" 300-500 threes a day this offseason that means he's probably putting up anywhere from 700-1200 threes a day, assuming he's hitting over 40%).

He's made it this far after essentially being left for dead, so it's not smart to invest doubt in Will Bynum. What comes of his Pistons work ethic we'll see in due time, but never expect a drop off in intensity. And with healthy ankles again, you can probably expect some more of these. 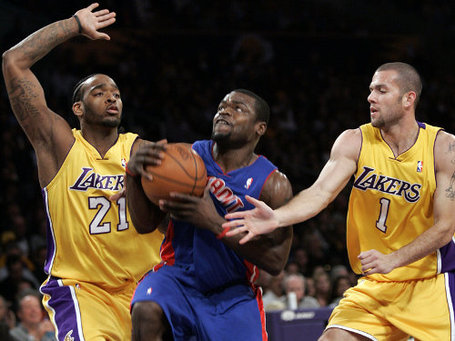 Kevin Sawyer: One season after breaking out as one of the Piston's most valuable players, Will Bynum was among many who suffered an injury plagued setback of a season. After Bynum a point for every two minutes of play in 2008-09, on a relatively efficient .520 TS%, it looked as though the Pistons had an embarrassment of riches at the guard position.

It was an embarrassment, alright. Bynum went from MFWB to MWCA (Must Watch Chucky Atkins) after missing 19 games due to an ankle injury. While the injury did not limit his efficiency, it did limit his aggressiveness. He went to the free throw line 1.5 fewer times per 36 minutes in 2009-10 than he did in 2008-09. Bynum's speed and ability to find the gap in the defense are his greatest assets. He is not a great shooter, and has no long range shot to speak of, shooting a why-bother 22% from beyond the arc.

Defensively, Bynum likes to harass ball-handlers, which leads to steals as well as an unusually high foul rate. His lack of size makes him a poor match against bigger point guards, but a healthy guard rotation should largely render that a moot point.

Bynum has expressed his ambition to fight for the starting point guard spot. He has certainly done enough to earn the opportunity, and he is the closest thing the Pistons have to a prototypical point guard, his assist rate having led the team each of the past two seasons.

The best news about Bynum is the price. In re-signing Bynum to a cheap, three-year deal, Dumars has secured a talented guard throughout the prime of his career. If Bynum can rebound from an off-year, as seems likely if he is healthy, he'll be one of the league's best bargains. 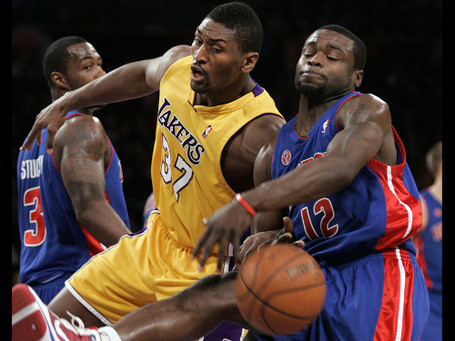 Mike Payne: MFWB started this last season just like he left the one before it-- flying high, scoring at will and proving he's the best point guard on this roster. He continued to look like the Rodney Stuckey that Joe Dumars always wanted, a drive-and-dish scoring threat who was, at times, impossible to defend. Then he got injured. And then everything fell apart.

Will played healthy for the entire month of November last season, showing even more than the player he was during the 2008-09 breakout. He recorded 15 points per game on 47.4% shooting, 4.5 assists, 1 steal and 35% shooting from three. The December 9th ankle injury derailed this new found growth, leading to a regressed Will Bynum that lacked his greatest talent-- speed. Bynum's speed, both forward and lateral, are the keys to his game on both ends of the floor. He just wasn't the same player without them.

Should we count the little man out? MFHell No. Adversity is no stranger to Will Bynum-- adversity fears Will Bynum. If history is any indicator here, MFWB will bounce back from this injury and become a better player for it. He's got a new (and completely affordable) contract, he's been busting his ass all summer (attempting 1000 3s per day), he's aiming for the starting lineup and pretty hard to stop. If he comes into training camp with the same speed he started with last season, Rodney Stuckey might have some cause for concern.

So what is a realistic expectation for Will Bynum in 2010-11? The logjam of shooting guards should impact Bynum's available playing time, as it is less likely that Rodney Stuckey will slide to the 2 in some matchups. With only 48 minutes available at the point, 15-20 minutes per game is a fair expectation. However, if Will can prove he's in shape and exert himself on the court, he could wind up splitting minutes with Stuckey... or perhaps even earning the starting gig.

Naturally, a trade or injury at either guard position will change this outlook for MFWB. But if Rodney Stuckey can't improve on last season, expect Will Bynum to pose a serious challenge...