When Joe Dumars signed Ben Wallace last summer, no one imagined that he'd be the team's best player in 2009-10. Lo, this was the Benaissance-- when a hero of old donned a once familiar cloth and fought with a might that dwarfed the expectations of man. These times were fraught with terror, but this man was Atlas, hoisting the fates upon his shoulders and leading his men to safety. How deep are the wounds that result, the scars that show the tests this man has faced? How long shall this Benaissance continue? Read on, dear reader, read on... 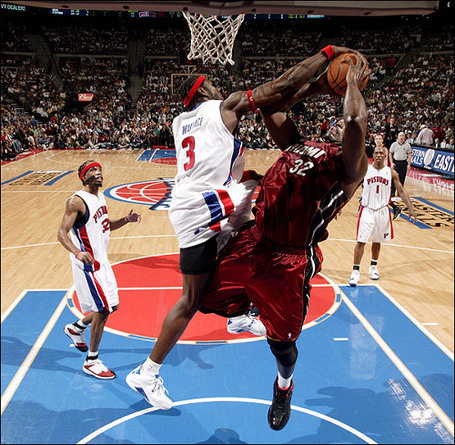 Mike Payne: Before Ben Wallace, how many times in league history has a vet minimum deal yielded the team's best player? I'm going to go with "never". Alongside Jonas Jerebko, Ben Wallace was the surprise of the season. The 35-year-old Wallace was counted out by pretty much everyone, hired with the expectations of spot minutes and locker room leadership. But the season this 35-year-old recorded was the team's best, showcasing a level of basketball intelligence that was more difficult to appreciate when his strength and athleticism were at their peak.

What qualifies Ben Wallace as the team's best player last season? The objective measures make quite a statement. Seasonal +/-, O-Rating, D-Rating, you name it-- Ben led it. What might come as a surprise is that when Ben Wallace was on the court, our offense was at its absolute best. For a player never known for an offensive game, his involvement on the offensive glass, with screens and more made our offense the most fluid and the most productive.

Possibly Joe Dumars' best move of the offseason was re-signing Ben Wallace to a 2-year, vet minimum level contract. With the season Wallace just recorded, you have to imagine that every contender in the league would have done anything to get Ben in their uniform. Miami, Boston, LA... Ben could have likely gone anywhere he wanted. But he didn't. He's a Piston again, and this contract pretty much ensures that he'll be a Piston until he retires.

But what does that mean in terms of on court expectations? Last year was remarkable, but it's time to temper those expectations. Ben exceeded our collectively low hopes in 2009-10, and we should be careful not to set the bar too high this year. It's not easy for a 36-year-old man to keep doing what he did last year, and it's likely to get considerably more difficult with time. 29 minutes per game and 69 starts may be too much to ask of Big Ben. 22 minutes and 41 starts should represent the middle ground of the hopes for Ben Wallace in 2010-11. If he can stay healthy, he can play big minutes in competitive games, but the older he gets, the more rest he'll need between those heavy encounters. The benefit to this, as MF Kevin Sawyer points out below, is it could be precisely what draft pick Greg Monroe needs to grow... 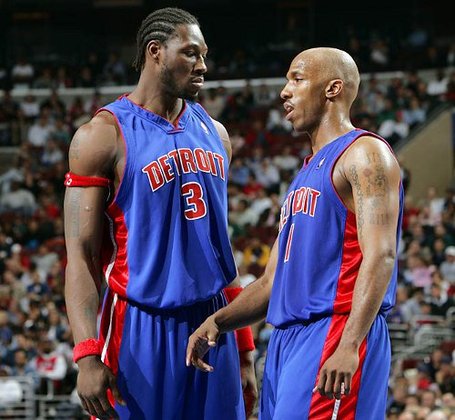 Kevin Sawyer: A quick word on the so-called "Benaissance". If you look at Wallace's per minute numbers from 2008-09, they are actually quite similar to what he posted last season. He was more efficient at putting the ball in the basket, but less likely to swat the ball away on defense. In truth, his regression, which actually began in 2002, has been extremely slow, with erratic minutes skewing his overall numbers.

All of which is to say that we should have expected a solid performance from a four time defensive player of the year whose physique is almost without parallel. It is also reasonable to expect a solid performance this season. Given his pittance of a contract, that's represents a lot of value.

That said, it is unlikely that Big Ben will match his offensive production from 2008-09, when he posted the second-highest field goal percentage of his career at 54%. The reduced shot-blocking is, alas, likely to continue. After so many seasons in the league, it's unlikely that his impressive basketball IQ is going to yield more fruit.

It also happens that Wallace has demonstrated a tendency to decline as the season progresses. In a way, this is ideal, as Greg Monroe is unlikely to be ready for the starting slot in the first half of the season, but will hopefully play his way into it by season's end.

That's the best case scenario. The worst case is that time catches up with a player who relies almost exclusively on his speed and athleticism to produce. It's a bit of a pickle. If the Pistons are going to make the playoffs, they'll need 1,500 quality minutes from Ben Wallace. But if he winds up starting game 82, it will probably be the last game of the season.