Last season was not easy on Charlie Villanueva. Beyond all the injuries -- the plantar fasciitis, the broken nose, the back spasms -- Charlie endured harsh criticism from fans and the media alike. In a season where everything that could go wrong did, Villanueva became a scapegoat, a point of blame for ills that were far from familiar to Pistons fans.

Charlie is poised to do a lot more this season. He'll be entering training camp in peak physical shape, with a chip on his shoulder and his injuries in the dust. What can Pistons fans expect out of CV31 in 2010-11? Kevin and I talk it out after the jump.

Kevin Sawyer: For all the talk of what a disappointment Charlie Villanueva was last season, he was actually one of the Piston's better performers. His per minute numbers were actually in line with his career stats, and he registered a career high (and team-leading) 35% from three point range.

Alas, we all expected better from the talented big man. After his last season in Milwaukee, he seemed poised for a Rasheed-style breakout season. It was this expectation that landed him a long-term contract with the Pistons. On defense, CV often appeared clueless and/or disinterested. The reality isn't quite so bad, and it takes a village to fail at defense when you have Ben Wallace on your team, but it ultimately led to more time spent on the bench.

Worse, his propensity to shoot three pointers made him appear disinterested on offense as well. Villanueva was both victim and perpetrator in an offense that simply could not move the ball. This is particularly disappointing since he is one of the league's best players in the post.

To which, CV should look to Sheed for inspiration. In his late twenties, Wallace took about one-quarter of his shots from beyond the arc, a mix that allowed him to create mismatches while dominating on the post. He was also an outstanding defender, posting big DWS numbers in spite of being a so-so rebounder. In short, he used his size to bully people in the post, and his finesse came to stretch the offense.

It's too bad that Villanueva has become the poster child for the Piston's struggles. He seems like a genuinely good bloke, and is saying all the right things about improving. If he's going to live up to his potential, though, he needs to leave Mr. Nice Guy in the locker room. 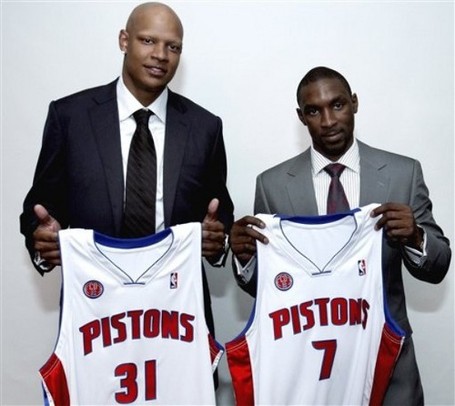 Mike Payne: For all that criticism, Charlie certainly didn't do himself any favors. While he showed offensive brilliance before his injuries, he was absolutely abysmal on the defensive end. How abysmal, you ask? Let's get statty.

SynergySports, a pro scouting tool now available to fans for a fee, totals up per-play efficiency on both ends of the court. In terms of field goal percentage allowed, turnovers generated and fouls that result in free throws, Charlie Villanueva was ranked 422nd in the league for 2009-10. The awesome part about Synergy is that you can watch the video behind these stats, like all 106 times Charlie defended a post-up shot attempt last season. Only a masochist could watch all 106, as the video is even more uncomfortable and humorous than a Ben Stiller comedy.

While his offensive struggles can be explained by injuries, his terrible defense moved him from the starting lineup to the quiet place on the bench where Chris Wilcox and Kwame Brown talk about feelings. By April, our own Matt Watson was even wondering if he was out of the Pistons lineup altogether. This was especially sad, because Pistons fans including myself had a lot of hope for Charlie last season. He had the makings of an especially exciting player.

And he still does. If his summer workouts with Arnie Kander can prove successful, Chiseled Charlie should be able to record a healthy, productive season in 2010-11. Like the Pistons other free agent signing Ben Gordon, the man was absolutely unstoppable last November, and he should be ready to pick up where he left off before the injuries slowed him down. Charlie has a downright nasty offensive toolkit, to the point that he could once again become his team's leading scorer per minute.

Of course, this all hinges on his defense. If that doesn't improve, his role on this Pistons team won't either. I'm willing to go out on a limb here and suggest that Pistons fans will see a significantly improved Charlie Villanueva on the defensive end. His summer training and injury-free body will make an impact on his defensive game, as will the time he's spent with Ben Wallace. Charlie is aware of his inadequacies on D, he's heard the knocks against him and he has been vocal about a commitment to change. His defense can't get any worse, but it's a safe bet to assume that he'll enter the season with a chip on his shoulder and will exert himself to the best of his ability. He won't need to worry about scoring, because he's shown that the offensive side of his game is purely natural.

If Charlie can improve his defense, a starting role will be his for the taking. If he can do that and stay healthy, the tough year he just completed will quickly be forgotten.