Over the last two seasons, Richard Hamilton has been on a steady decline that seems to outpace his age. While many may have expected Rip to age gracefully into his 30s, there has been little graceful about his game of late. 2009 was a tough year on the man, and the coming season won't get much better if his ankles continue to give him trouble.

If Richard Hamilton has truly mended that right Achilles Heel, it's fair to expect a significant return to form in 2010-11. This would bode well for the Pistons, their activity on the trade market and their record in the season ahead. What can Pistons fans expect? Kevin and I read the tea leaves after the jump. 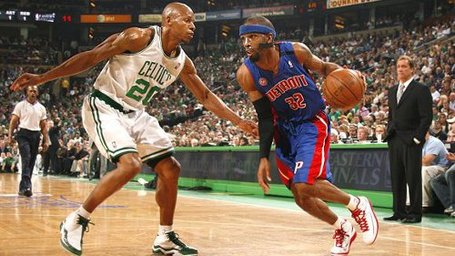 Kevin Sawyer: Has any player hit the wall harder after receiving a contract extension than Rip? In 2007-08, at the age of 29, Hamilton was firing on all cylinders. He posted a career high .151 wp48, earning his third consecutive all-star appearance. He finally seemed to have mastered his "tramp ball", knocking down 44% of his three pointers while upping his attempts from the previous year.

Rip had all the hallmarks of a Reggie Miller type of player, whose excellent conditioning and long-range shooting allow him to play at a high level through his mid-30s. Heck, Reggie could have played into his 40s. Presumably, this is what Joe Dumars was thinking when he inked Rip to a three year contract extension. I mean, to the degree he was actually thinking at all during that period, and in New York binging in mescaline and whippets with Isiah Thomas...

As you might have gathered, Hamilton hasn't exactly lived up to his big pay day. With Chauncey out, and Stuckey running the point, Rip has taken it upon himself to initiate the offense. While I'm sure his fantasy owners appreciate the bump in assists, it has come at the expense of his entire offensive game.

Rip is the quintessential second option on offense. He is at his best (as TV announcers would remind us ad infinitum) coming off screens, and flatly outrunning his defender off the ball. You can't do any of this when you have the ball.

The results are cringe-inducing. 41% field goals, 30% from beyond the arc, unusual injuries, and an offense that doesn't even make defenders try. You know how in basketball video games the offensive players wind up chasing the defensive players, because the computer doesn't how any better way to do it? That's what it looks like when your pick and pop guy is trying to be LeBron James.

If Rip is going to be a positive contributor throughout the life of his contract (to say nothing of his mid-30s), he's going to have to rediscover the game that got him here. 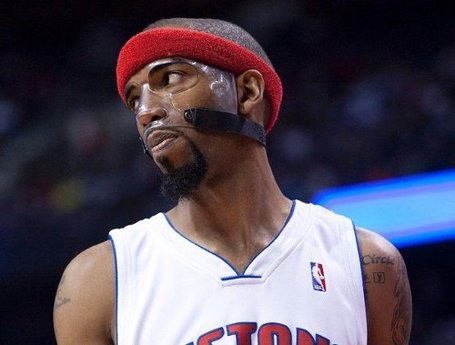 Mike Payne: Arnie Kander, you've got your work cut out for you. The Detroit Pistons' win record, trade flexibility and salary commitments are hinging quite a bit on the right ankle of Rip Hamilton, and another injury could set the team back further until his contract comes to a close. It's pretty remarkable just how much Rip relies on that healthy ankle and just how limited he is without it.

Part One: The Tramp Ball

Rip's famous Tramp Ball, which peaked at a league-leading 45.8% efficiency in 2005-06, was decimated upon his return from healing that ankle. Rip's 3-point shooting mechanics involve a lot of fluidity and lift, both of which were pretty much gone when he returned to the court last season. In December 2009, Rip shot just 19.1% from three on 4.8 attempts per game, meaning the Pistons threw away 4 possessions for every one three-pointer he made.

If you look at Rip's seasonal 3-point shooting, the decline over the last two seasons is pretty disheartening. Fortunately, there's a lot of hope for Rip, because these averages do not tell the whole story. Look at 2009-10, where Rip averaged 29.7% shooting from the perimeter. His worst month was December '09, putting up 19.1% as shown above. But as Rip healed, his three-point shot improved closer to his career averages:

This isn't a fluke-- when Rip gets injured, his 3-point shot is the first thing he loses, but it has always come back in time. In 2008-09, Rip injured his groin, missed eight games and returned in mid-January. His 3-point shooting sunk from 44.8% in December to 30.4% upon his return in January, then climbed to 34.2% in February, 38.5% in March, and 46.2% in April. Over the last two seasons, Rip has fought through the pain and eventually gained back his deadly 3-point shot, his almighty Tramp Ball. (Sidenote-- you know what else is interesting? Rip's free throw shooting has followed the same pattern. Check the splits.)

There's been a common concern with Richard Hamilton since Chauncey Billups was traded to Denver. You've heard it, every MSM sports writer has talked about it, it's been repeated to an annoying degree-- "Rip is not truly effective unless he's paired with a pure point guard". "Rip cannot create for himself". While I'm not saying I fully agree with those knocks, let's go ahead and humor them. What is yet another season without a pure point partner going to look like for Rip Hamilton?

Rip has always been at his best out-running his defenders, spotting up for open-shots and coming off screens for catch-and-shoot opportunities. Since each of these plays is dependent upon ball movement, with Rip the receiver, who is going to be doing the dishing?

With the roster the Pistons are fielding at 2010-11 media day (today, btw), I expect the Pistons to move from one of the league's five worst passing teams to slightly above average. If Greg Monroe can log a healthy number of minutes his rookie season, his scoring could add as many assist-receipt opportunities as his own passing could create. Stuckey and Bynum will have more options beyond their own shots, and Tracy McGrady has always been an astute (and rocket-armed) passer. These points of distribution will lead to a lot of looks for Rip Hamilton, to the point that he may be able to defer the play-making to his teammates instead of trying to shoulder everything himself.

Just think of all the ball movement in the limited minutes where Rodney, Rip, Tracy, Greg and Ben are on the floor together. In a lineup like that, Rip should have no reason not to focus on finding the open floor instead of trying to find his teammates. In short, John Kuester now has an expanded set of tools for ball movement, and if that ball moves more freely, Rip Hamilton could find a world of benefit.

If Rip can stay healthy in the season ahead, his 3-point shooting should return to form. If John Kuester can orchestrate improved ball movement thanks to Detroit's updated roster, Rip's game should stand to benefit. It's all going to hinge on health, and the near-term future of this team is involved in the balance.