It was inevitable-- eventually, Tayshaun Prince's streak of consecutive starts would come to an end. After 601 consecutive regular season and playoff starts, the man kind of deserved that 33 game break. Two questions now loom about Tayshaun, whether he can put in a full season again... and if he'll do it as a Piston. Kevin and I talk Tay's future after the jump. 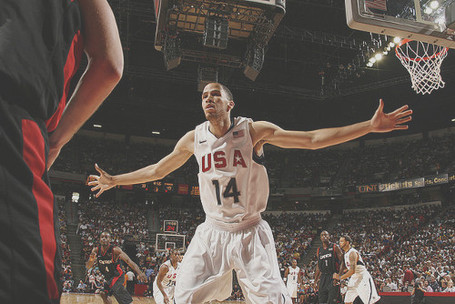 Kevin Sawyer: For those who doubt the existence of the "age-30" wall for NBA athletes, I present to you the Detroit Pistons roster. Prince hit the wall in spectacular fashion, as back injuries ended an impressive 496 game streak of starts and held him out of the lineup for 33 games.

But those long arms come in handy on offense as well. Prince has never been more than a third offensive weapon, but he could always be depended on to create his own shot. This explains why Prince, unlike every other veteran on the team, managed to match his career percentage from three point territory.

His return will give Detroit an important option on offense, but the iron man days of 82 games at 37 mpg are likely over. Fortunately, Detroit has two capable replacements at the position between Austin Daye and Tracy McGrady. It is a minor irony that the backup SF, a revolving door position that used to dominate conversation on this blog, is now arguably Detroit's lone position of strength. But that bodes well if back ailments sideline Prince...

...or if he winds up as trade bait. I am skeptical that the Pistons will find a trade partner who can return real value for Prince. A contender isn't going to give up a key player, and plenty of teams are sitting on cap room and trade exceptions, devaluing an expiring contract as a commodity. A couple of teams are probably looking to cut salary because of impending sales, but, you know...

So we're likely "stuck" with Prince. If he can return to form, that's not a bad place to be. If he continues to hit the wall, it could be a long season unless the Pistons are prepared to hand over the reins to a healthier (younger?) player. 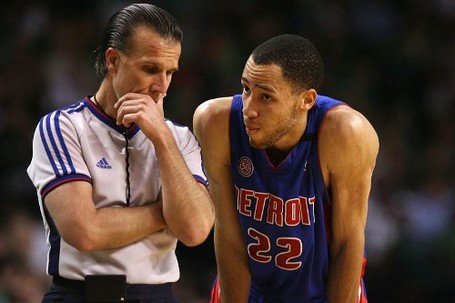 Mike Payne: Like the discussion of Richard Hamilton, this one needs two parts.

Eventually, even Iron Man has to rust. After 495 consecutive starts in the regular season and 106 more in the playoffs, time caught up with Tayshaun Prince and the impossible happened-- an injury. While this kind of back injury has turned gods into mere, well, Tracy McGradys, Tayshaun took his 33 game break to work on engineering enhancements with Tony Starks. A few tweaks here, an upgrade or two there, and Tayshaun Prince MkII was ready for testing.

The normally quiet, calm and collected Tayshaun Prince exploded in February, March and April to play some of the absolute best basketball of his career. You say "back injury", I say dude just needed a damn vacation. Seriously, in the last two months of the season, Tayshaun recorded 16 points per game on 52% shooting, 42% from three, five rebounds and four assists (not to mention his trademark of never turning the ball over and never fouling). He hadn't played like that since he was 24-years-old. In a season that saw the Benaissance, it also ended with a Tayshaunaissance. (okay, I'm going overboardaissance)

Sounds a bit rosey, doesn't it? The question is whether the old model arc reactor can handle the power needs of Tayshaun Prince MkII for another full season... or the rest of his career. It's unlikely that the Pistons will see the Spring 2010 Tayshaun Prince this November, and it's even less likely that Prince will record another 82 game season in his career. But the point I'm trying to make here is that Tay's injury did not appear to take away his ability to play solid basketball. In fact, once he got comfortable, he got really, really good again. Like... 2005 good.

If Tayshaun Prince can stay healthy through February, the Pistons may actually see meaningful offers on the trade wire. The weakest position in the Western Conference is easily small forward, and there are a good number of young teams in dire need of a solid, veteran, defensive presence. A healthy Tayshaun is a safe bet in that regard, and an injured Tayshaun expires anyway. Western Conference GMs should see Tayshaun as a low-risk, high-reward opportunity to instantly improve their teams.

Besides, that's the environment that Tayshaun really needs to be effective. In the east, the small forward has gotten bigger, stronger and a lot more dominant in the last five years, and Tay's trademark defense has been lost. Tayshaun made a name for himself on the Tracy McGradys, the Reggie Millers, the Richard Jeffersons of the league-- finesse players whose offense was based on skill and retarded shoulder tattoos. The Western Conference is largely made up of these kind of players where Tay's wiry length could be at its greatest again. Once Carmelo gets his way and moves east, the west will be largely free of the type of player that gives Tayshaun so much trouble in the playoffs.

Who will come knocking? I doubt a current contender would get involved unless they lose a starting forward to injury. The likely trade partners are the lower level WC teams like the Warriors, the Clippers and the Kings, all of whom may be able to offer Detroit something of value.

If Joe's phone doesn't ring, so be it. If Tay's contract expires here in Detroit, that'll leave Dumars with a bit of flex to work out extensions for Jerebko and Stuckey-- and even Prince himself. In a perfect world, Prince retires a Piston, spending the next five years as the backup 3 this team has always and so sorely needed. He has the chance to be more than that out west, but call me greedy for wanting to see Joe Dumars' greatest draft pick retired in the jersey he wears today.

What will Pistons fans see from Prince in 2010-11? The same Tayshaun Prince they've known for so many years, but no longer in 82 game stretches. What's not clear is the jersey he'll be wearing next Spring.