One down, 14 to go. With Terrico White behind us, we move one bench spot to his right to discuss the pivotal sophomore season of DaJuan Summers. Why is this season pivotal, you ask? If Summers can't improve his shooting efficiency and establish some consistency off the bench, this may well be his last season in a Pistons jersey. 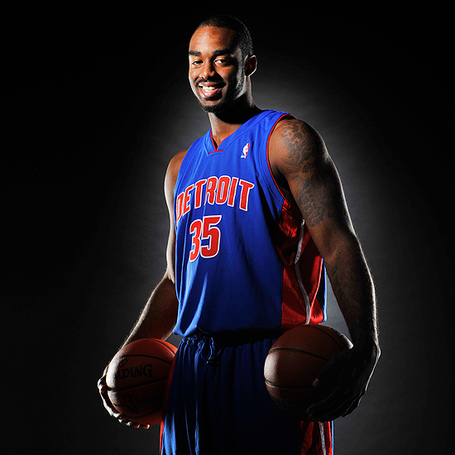 After the fold, Packey, Kevin Sawyer and myself take a closer look at what fans can expect of DaJuan Summers in the 2010-11 NBA season.

Brian Packey: In 44 games last season DaJuan Summers shot worse from the field (35%) than he did from 3-point range (36%) in less than 10 minutes per game. DaJuan's opportunity to make good on his summer workouts in China (yes, he worked out briefly in China), and improve upon last year, will, unfortunately, be tough to do because of ... you guessed it ... the Tracy McGrady signing. He's not a PF, as much as we'd like him to be, and even if he was it's likely Jonas Jerebko will take any remaining PF minutes because of the crowded SF spot.

Last year, I liked what I saw of Summers from downtown, I liked his hustle and he's always been physically ready for the NBA. I'd like to say I'm pumped to see DaJuan step it up a notch and excel, but instead I only find myself feeling bad for him. I really do. Not only was he the guy the Pistons chose instead of, you know, that other guy, he also just happens to share the same name as that other, knee-ligamentless guy (spelled slightly different). Naturally, he was immediately coined Wrong DaJuan by the Pistons faithful and didn't stand a chance. A year later, that notion hasn't really changed.

Kevin Sawyer: Summers had a disappointing rookie season, having posted a PER of 7.5 and WP48 of .003 (meaning you would expect a team of Wrong DaJuans to go 1-81). It wasn't for lack of opportunity. He played 405 minutes in 44 games, which isn't bad for a second rounder.

Highly athletic, but not necessarily dextrous, Summer's offensive game is hampered by his inability to put the ball in the basket. He led the Summer League team in ppg, but did so with a paltry 41% from FG range (31% from distance). His free throw percentage does not suggest the possibility of a major turnaround.

His best opportunity probably lies at the 4, where he can blow buy slower defenders, but I don't think he has shown he can defend that position at this level. Without a reliable jumper his foot speed will infrequently translate to baskets and his lack of rebounding makes him a liability at the position.

Dumars prizes dribble penetration above all other attributes, so Summers will have the opportunity to improve. If nothing else, he'll provide fodder for YouTube mashups for at least a couple more seasons. Right now, however, he looks like a three trapped in a four's body. On this team, that makes him redundant at best.

Mike Payne: It's tough to put up consistent numbers without consistent minutes, and there weren't many of those for DaJuan Summers last year. However, he didn't appear to do himself many favors, as most of his on-court time saw missed shots, bad decisions and a net loss in production for his team. Across 44 games last season, he really only put up one solid performance across the board, where he shot well, scored and did the dirty work required of him at his position. Beyond that, this physically-gifted player just didn't look comfortable on an NBA court.

Fast forward to the Summer League in Las Vegas this year, young DaJuan at least looked improved if you ignore the stats. He was spending a lot of time in the interior, using his size and athleticism to play the way most of us had hoped he would have in NBA minutes last season. Compared to last summer, he drew more fouls and committed fewer, shot a lot fewer three pointers and converted on them a bit more efficiently. While trying to translate Summer League numbers to NBA production is a fools errand, this at least gives us a grainy picture of what Summers has been working on.

Even if he has developed, he's still 5th in the depth chart at small forward, sitting behind Tayshaun Prince, Jonas Jerebko, Tracy McGrady and Austin Daye. If he couldn't overcome Jerebko and Daye to earn meaningful minutes when Prince missed 33 games last year, he'll have an even more difficult time finding minutes in an even greater logjam this year. It'll take a trade and/or an injury to get him on the court for more than garbage time in 2010-11. If not, he may find himself in Pistons Purgatory playing pickup ball with Walter Sharpe. While he may have been The Wrong DeJuan, you'd like to think he deserves a lot better than that...

Your turn, Bad Boys. What do you think we will see out of DaJuan Summers this season?