News flash, Pistons fans: Chris Wilcox is still a Piston, and remains likely to be one on opening night. Wilcox was easy to forget this summer, being swept under the rug to instead discuss draft picks and logjams, summer league and trades. In fact, trade discussions were virtually the only place his name came up in the last few months. Ironic, that-- as a trade involving Chris Wilcox should represent the peak of fan expectations for him this season. 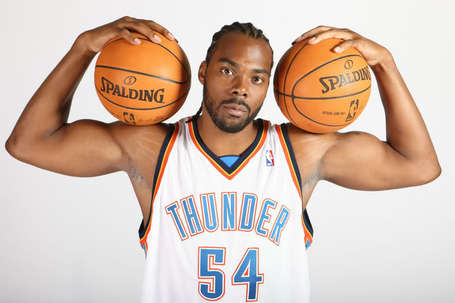 I'm flying solo on this one, as Matt, Kevin and Packey (like the rest of us) should have better things to do than talk about Chris Wilcox on Labor Day. But to keep this series alive until it gets exciting, we shall push on with willful, uh, cox? Sorry, I had to.

Upon the news that Chris Wilcox signed a two-year, $6M deal with the Pistons last summer, the alarm bells immediately rang in Sawyer Central, Minnesota. Our own Kevin S. pointed out that the player option on this deal was a completely boneheaded move. It was a continuation of the numb-skullery coming out of the Pistons front office last summer. If Wilcox played well last year, he could pass on his player option for a bigger/longer contract elsewhere. If he played poorly, boom-- he earns a $3 million dollar bonus and another year to play.

So did he play well last year, with the Pistons floating him a loan so he could waltz off to greener pastures? No. Statistically, he played the worst season of his career, and was by far the worst player on our roster in terms of on/off court production. Throughout the season, the +/- meter trended so low when he was on the court that he recorded a -12.0 on the season, 4 whole points worse than the 2nd worst, DaJuan Summers. But you don't need stats to tell you that, you all saw it with your own two eyes.

So what made Wilcox so bad last year? Turnovers. The man was an absolute mess with the basketball, recording a legendary 21% turnover rate. He also fouled a lot. Not at an Amir Johnson clip, but close. While his offense wasn't bad when he slid over to the five, this is where he became a true defensive liability, getting eaten up by the opposition possession by possession.

This isn't supposed to be a mud-slinger, but a preview on what we can expect of Chris in 2010-11. It was a surprise to no one when Wilcox exercised his extension, giving us fans another season worth of Method Man jokes. So what can we expect out of him?

Thanks to his size and position, he'll see more minutes than Terrico White and DaJuan Summers, even though both of those players are much more deserving. He'll be playing spot time behind Wallace, Monroe and Maxiell at the 5, and might see time if there is an injury at power forward. But Wilcox isn't going to give real value to the Pistons until closer to the trade deadline, where his expiring $3M salary could help facilitate a larger trade. His contract gives Dumars the flex to make something happen by the deadline, and may be the financial piece needed to actually clear out the team's glut at shooting guard and small forward.

Beyond that, what can we really expect out of Chris Wilcox this season? He was our weakest link last year, and he'll likely be again thanks to that undeserved $3 million dollar bonus...