Tracy McGrady is a Piston. It still feels a bit surreal, doesn't it? This two-time scoring champion, once brilliant but decimated by injuries, will be representing the red, white and royal blue when the ball tips in October. With so many variables at play here, it's not easy to predict what this will mean on the court. Matt, Kevin, Packey and myself do our best, while this series of player previews gets a whole lot more exciting. 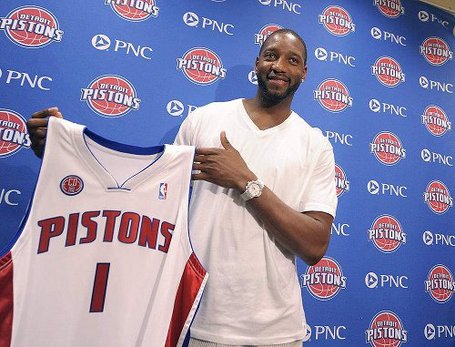 Brian Packey: When a buddy of mine predicted that Tracy McGrady would sign with the Pistons, based solely on him seeing T-Mac at a bar in Detroit two days before any initial roomers surfaced, I thought it was crazy. The Pistons have umpteen wings, why in Jod's name would they sign another?

The reports of the Pistons being interested came to light, it was then confirmed and, ultimately, McGrady signed on the dotted line for an NBA veteran's minimum wage. Before posting a knee-jerk reaction, though, I took the liberty to steal a drink from Langlois' liquor cabinet to try and help it sink in. It wasn't too long before I started to feel at ease about the signing and actually come around to liking it.
McGrady has a history of relatively serious injuries to his name, he's 31 years old and he's the 37th guard on the 15-man roster -- we all get it. But T-Mac may have an even bigger chip on his shoulder than the collective Pistons who have been getting pooped on endlessly all offseason by "experts." This is a former scoring champ who is being left for dead and he understands it. If he wants another consistent shot in this league, he knows he has to perform at a high(er) level this very season.
Yes, it sounds somewhat familiar (see Iverson, Allen). I understand the old saying "fool me once, shame on you; fool me... you can't get fooled again," but the circumstances are different. Iverson felt entitled and moped when he wasn't coddled. He seemed content with where he was as a player and would throw parties in random cities while out with "injuries" McGrady appears to have a real desire to prove doubters wrong, which shows in how hard he's supposedly working this offseason with Arnie Kander to get healthy. Iverson expected the doubters to do the work for him.
Will T-Mac return to his scoring champ form? Aw, haillllll naw (or, in other words, probably not), but he'll get the opportunity to surprise similar to the way Ben Wallace did last year, who everybody was counting on to simply spot sets in the weight room. If the Kander man is as magical as we all think he is, there's no reason to think T-Mac can't be a productive player in whatever role he winds up earning. Remember, it wasn't his ability holding him back, it was injury problems.

For a team that won 27 games last year and not in a position to contend for a title, taking a dirt cheap flier on T-Mac isn't even close to one of Joe Dumars' roster gaffes. When opportunity arises to fill the existing holes with legitimate players (who simply aren't available right now), or a younger player like Austin Daye earns the minutes to play over McGrady, the Pistons won't be in too deep to let go of or trade him. In the end, adding a guy who is looking to prove people wrong to a team looking to prove people wrong isn't what I'd call a recipe for disaster. If you want to see disaster, look at Ben Wallace shooting game-tying free throws, this, or last year's team. 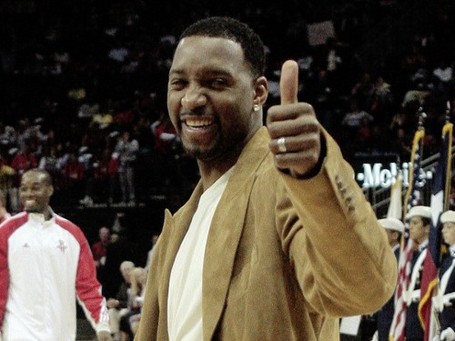 Kevin Sawyer: The question isn't whether McGrady has anything left in the tank. He's 31, he has never been an NFL running back, and he is not Antoine Walker. Oh, and he was the best player in the NBA for a spell. The question is whether T-Mac has the wherewithal recognize what he can and cannot do, the intensity to deliver that for 1500 minutes this season, and the humility to do so operating from the bench.

What can he do? He lock down opposing wings, rebound, pass, and use his offensive-minded reputation to get to the line. Think Scottie Pippen on the Trailblazers. He infrequently turns the ball over, relative to how frequently he has it in his possession. He's one of the few players who has managed to be a very efficient player while being an inefficient shooter.

Which brings us to what he cannot do, namely jack up three pointers. A career 34% shooter from long range, Mcgrady brings nothing to the table from behind the arc. This has never dissuaded him from the endeavor, though he has toned it down the last couple of years. Teams were certainly give him the opportunity to let it fly from outside, since the Pistons were among the worst in three point shooting last year.

If McGrady becomes a spot up three point shooter, he'll be a bust. If he can improve one of the league's more anemic passing offenses, while chipping in across the board, he'll be a bargain, and could be a vital component of a return to the playoffs. 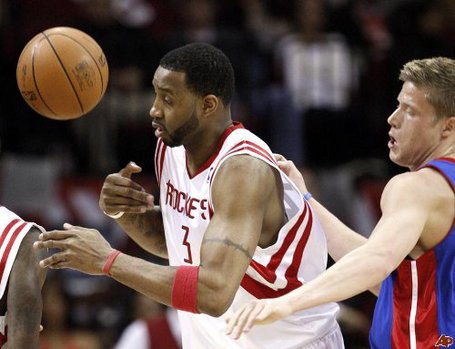 Mike Payne: There's nothing I could say about Tracy McGrady the player that Matt, Kevin and Packey haven't already said (and eloquently so). Beyond what he brings to the court, it's also important to keep in mind what his presence alone does for the organization. Of all the things that Tracy McGrady could bring to the Pistons this year, flexibility is amongst the most valuable.
Tracy McGrady gives Joe Dumars greater flexibility to move either Tayshaun Prince, Rip Hamilton or both. If Joe has been apprehensive to move these players due to the inexperience of his younger wings, McGrady's cross-positional veteran talent could provide insurance. While Tracy's injury history still makes him a risk, his presence alone should make it easier on Joe to make a move that he otherwise may have declined.
Second, if Tracy plays quite well and remains healthy up to the trade deadline, you can expect playoff teams and legitimate contenders to have interest. This alone could yield an additional draft pick, or could involve a package for talent coming back our way. In a package, a healthy McGrady could again provide the flexibility needed to get us out from under one of our longer, under-performing salary commitments.
The writing should be on the wall for our young wings. If Prince is traded, neither he nor McGrady will be on the roster come 2011-12. While the small forward position will be crowded this year to start, McGrady's flex could be what Dumars needs to confidently move Prince and finally hand the keys to Jonas or Austin at the small forward. 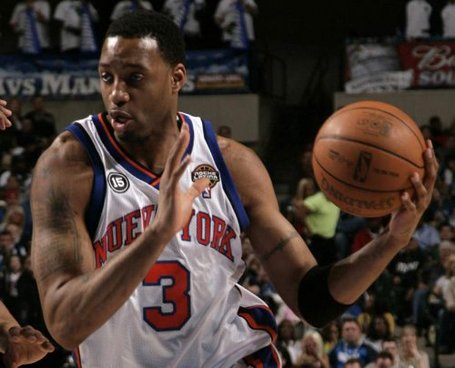 Matt Watson: McGrady's arrival in Detroit has been met with confusion, laughter and even scorn -- the latter, I suspect, stemming from lingering resentment over the failed Allen Iverson experiment. But while McGrady may be a faded superstar with somewhat inflated perceptions of his self-worth, that's where comparisons with A.I. should stop. First of all, the guy wants to be here, even if it's to prove the rest of the league wrong. Instead of arriving with a sense of entitlement, he's reportedly spent the latter part of his summer camped out at Detroit's practice facility with the training staff.

Secondly, after signing for the veteran's minimum, he's the lowest of low-risk investments -- especially when you consider the league is subsidizing some 35% of his salary. If he's even a marginal rotation player, he'll be one of the league's better bargains. And if the worst-case scenario is true and he maxes out as a still-injured shell of his former self, well, at least he's a reminder to his young teammates how fleeting fame and talent can be in the NBA. But despite some frustation boiling over in his final season with the Rockets, he's never been labeled a locker room cancer, and he's certainly one of the more socially aware players in the league. McGrady has notoriously never advanced beyond the first round of the playoffs, but it hasn't been for lack of effort: his 24.7 PER over seven playoff series exceeds his career regular-season mark of 22.8.
That's enough justifying McGrady's career -- the more pertinent question remains: does he have anything left in the tank to produce this year? His most recent track record with the Rockets and Knicks is atrocious, but his well-chronicled recovery from microfracture surgery is clearly to blame. He's only 31, and even if his knee issues forever slow him, he still has enough time to reinvent himself as a playmaking small forward as opposed to a slashing two-guard. (And barring a Rip Hamilton or Ben Gordon trade, if McGrady plays at all this year, it will be at small forward.) He's been an above-average passer his entire career, and he's lanky enough to make plays on both ends of the court even if he's lost a step. Arnie Kander & Co. have done an incredible job salvaging and/or extending the careers of players thrown onto the scrap heap due to significant knee injuries, and they've never worked with a player with as much natural ability as McGrady.
Even if the T-Mac Reclamation Project goes to plan, minutes at the three will likely be at a premium -- until, of course, Tayshaun Prince is injured or traded, both of which to me seem rather likely. In fact, while there are too many wild cards for me to confidently predict McGrady's numbers, I'll go out on a limb and say he appears in more games as a Piston this year than Prince, and that he turns enough heads to secure a rotation spot with a legitimate contender a year from now.