El Heat sans Dwyane Wade, Chris Bosh, and one of Mike Miller's legs are very beatable. That's not to say they're not good, because they are -- any team with LeBron James is probably capable of winning 50 games. But, as Kevin said in the preview, the Pistons had a chance of sneaking one out without anybody else at the dinner table noticing in Miami against a very depleted, and likely tired, team coming off of a loss in New York less than 24 hours earlier.

It certainly felt like the Pistons were going to steal it, too. After all, they led for more than 36 minutes. The Heat had the lead for less than half AH quarter, but all that matters is who owns the lead when the clock hits all zeros. Match point, Miami.

When you're shooting less than 40-percent against LeBron and surviving on Chris Wilcox tip-ins, you're living on the MFedge. And because the Pistons couldn't pull away down the stretch, LeBron was given an opportunity to go into take-over mode ... with, um, Eddie House.

There was some contention over House's final two points, specifically whether or not he was actually fouled (in the act of shooting) by Ben Gordon with six seconds left in the game. Live it appeared Gordon defended it (surprisingly) well and House was out of control. The first replay confirmed. However, upon further review, House in fact gave a nice subtle head fake that induced Gordon to jump before House ultimately took his wild looking shot. That minor difference in timing led Gordon's extended arm to knock House on his shooting wrist, albeit slightly, which is probably what drew the whistle. You can kind of see where Gordon's hand is headed --for House's wrist -- in this screen grab below: 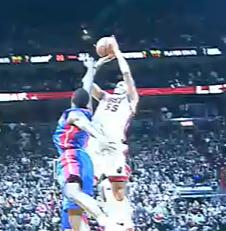 Still kind of a weak call, especially when you consider the Pistons final play where Austin Daye may or may not have been fouled on his game-winning oop attempt. The play Kuester drew up was brilliant and gutsy. There's no telling what option Daye was considering it took almost four-plus seconds for it to develop, but Daye was wide open for an easy oop given Prince provided the useful alley -- and he did -- so that's all that matters. The Pistons had a chance to win it, but unfortunately Daye couldn't flush it.

The screenshot below (and what I saw on a dozen replays) suggests Daye didn't get a good enough grip on the ball or high enough above the rim to finish properly. 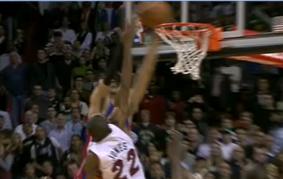 His body is almost leaning away from the rim -- and that's before Jones puts his hand up on Daye's belly -- and the ball doesn't get completely above the rim until it's too late, when it's then thrown completely over it. Jones may have also grazed Daye's wrist/hand, but I don't think that had any affect on the shot -- it was already a miss. This is where Daye adding some strength/bulk will allow him to finish these in the future. He definitely should've been able to finish this even with some incidental contact.

In the end, this loss is just another on a long list of heart breakers, games the Pistons had in the final minutes, even seconds, but let slip from their fingers -- literally.