Tom Gores' rep confirms that a deal is not yet in place; exclusive talks extended, though

Share All sharing options for: Tom Gores' rep confirms that a deal is not yet in place; exclusive talks extended, though

I hate to be the bearer of bad news, after ill-advisedly relaying such great (false) news before, but the head tilting party is officially on hold [via Jennifer Hammond]: 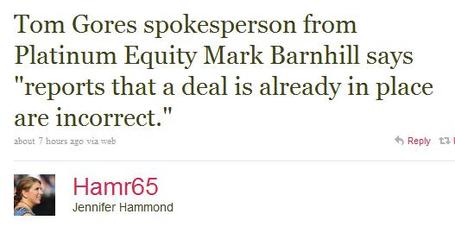 According to The Detroit News, who has had the upper hand throughout this whole sale process:

"The parties are continuing to work in a cooperative manner and have agreed to a new, 14-day exclusivity period," said Michael Layne, a public relations executive in Farmington Hills, who was speaking on behalf of Pistons owner Karen Davidson.

It'll be interesting to see what the Detroit Free Press posts on the matter in the next few days, but it's probably best if they just go sit over by the garbage can and think about what they've just done.