It's that time of year again. No, I'm not talking about the Pistons winning meaningless games and hurting their lottery odds (well, that happened, too, but I'll get to that later); I'm talking about the annual Pistons Care Telethon to benefit the Boys and Girls' Clubs in Michigan. While you were watching NCAA basketball all day (or doing whatever it is you were doing), the Pistons devoted their entire day, starting at 5 a.m. and including the game, to raise money for a fantastic cause. In all, the Pistons Annual Care telethon raised $351,110 equaling 7,022 memberships. Neato, gang.

But, yeah, the Pistons also won a game, 99-95 over the Knicks from New York, thanks to 54 bench points and holding Carmelo Anthony to six points on 2-12 shooting. The win was a really nice reward for the sell-out crowd. (Yes, a sell-out crowd!)

Six Pistons finished in double-figures. Prince led the way with 16 on 8-17 shooting and Chris Wilcox had to be the Terry Mills Unsung Hero and the MFMVP of the game with 13 points and 12 rebounds, including a stick-back slam dunk shot with about a minute to go to put the Pistons ahead for good. 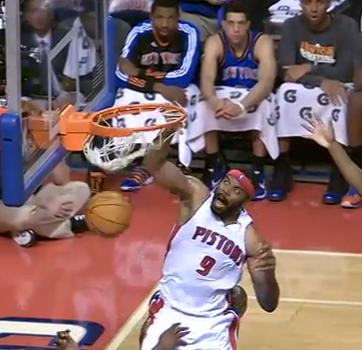 Try making that face while clicking to read more after the jump ...