Per the scoop legend Yahoo!'s Adrian Wojnarowski, Lawrence Frank will be the next man in charge of the mutinous Pistons, assuming dude abides by its forthcoming terms: 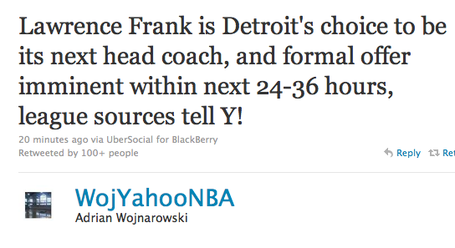 Pistons beat writer Vince Goodwill chimed in about a half hour later, tweeting that a league source says it's a 'done deal.'

Now, I imagine there's going to be some initial disappointment around these parts because it's not Laimbeer, but at least it's not Mike Woodson/Dumars' choice, right? The report less than a week ago was that Dumars wanted Woodson for the job, but his new boss Tom Gores fancied Frank. If that's true, then I think Gores is making it pretty clear who is running the show.

Either way, Frank is a strong choice. He has experience (and a record for consecutive wins to start a coaching career!), he's defensive minded, and perhaps most importantly he's not another pluck from the 2004 Larry Brown family tree of coaching. I'm just a little surprised they're going forward with the move now with the lockout in full swing and there being no signs of it ending any time soon. Let's hope good news on that comes next.