Here's a look at some interesting photos, videos and links on the Detroit Pistons as they finish up Day 2 of training camp.

It's Day 2 of training camp and there's been plenty of interesting news bits around the internetz for us to share with you, so let's dive right in.

Yesterday, we shared some photos from Monday's media day session, but somehow missed this one, via PistonPowered: 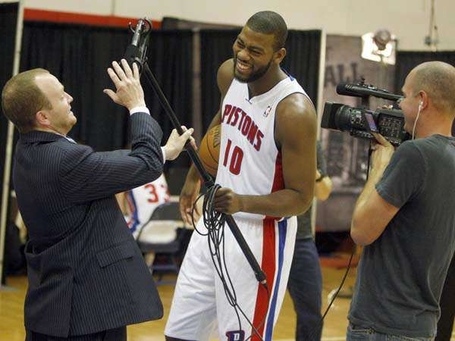 There was a time when this would be construed as a player-on-coach hate crime. Buffoonery and Koostis, and such.

Monroe also played around with Slava Kravtsov's interesting free throw/groin dance/stretch during the first day of training camp [via freywagg].

Hopefully, the Kravtsov winsome smile before sinking the shot is part of his free throw routine.

It's good to see Monroe and Kravtsov have some good-natured fun. There's obviously a language barrier that comes with Kravtsov and it will take time for him to acclimate:

"You've just got to make sure that if he doesn't feel comfortable saying that he doesn't know, then through the mistakes that are being made -- whether they're his, or someone at his position -- we correct them right there, and he gets it," Frank said. "New language, new system, new culture -- it's a lot. And normally, that cultural assimilation takes time."

Frank said the easiest way to determine whether a foreign player comprehends is "when you see it on the court."

Another rookie looking to adjust is Andre Drummond. He's been in Detroit for the past three months learning from Ben Wallace, Greg Monroe and even Corey Maggette. During that time, Drummond has apparently developed a secret move in the post that, he says, puts "points on the board." Maggette and Frank say Drummond has been working extremely hard, and Monroe says that Drummond definitely has the tools to be a very good center in the league.

From the same story, via Big Z in Orlando, Maggette has bestowed upon Drummond a couple of horrible nicknames: Pimp Juice and also Bee-Dizzle.

"His nickname is Pimp Juice," Maggette said. "And he calls me Sea Drizzle, and then I call him Bee-Dizzle."

'Pimp Juice' seems to think the Pistons are going to be great this year:

Drummond said that he already has a connection with Monroe and they complement each other.