There are no words to describe the awesomeness of this photo. But I'll try anyway.

Share All sharing options for: Andre Drummond, Rodney Stuckey get in holiday spirit

With this photo, which can be viewed in full below, is the best thing I've seen related to the Pistons since they blew out the Phoenix Suns by 40 points.

Seriously, with this picture I will personally exempt Andre Drummond and Rodney Stuckey from any criticism for the rest of the season. Drummond could turn into a combination of the worst parts of JaVale McGee and Andray Blatche and I wouldn't care. Stuckey could kneecap Brandon Knight and fake an injury to ensure Will Bynum got playing time and I wouldn't care.

This is pure awesomeness. A big tip of the hat to Piston Powered who unearthed it off of the Detroit Pistons Facebook page.

The context was a worthy charitable outing. The photo set -- yes, there are more but none nearly as awesome as the picture shown below -- says this: "Andre Drummond (as Santa) and Rodney Stuckey (as the elf) put smiles on the faces of kids at Whaley Children's Center in Flint as the players took them on a holiday shopping trip to Meijer."

Props especially to Stuckey who not only was willing to play elf to Drummond's Santa but showed that veteran leadership by being willing to pose with the Hello Kitty play set while letting AD have the infinitely more awesome Lego's Star Wars Millennium Falcon. 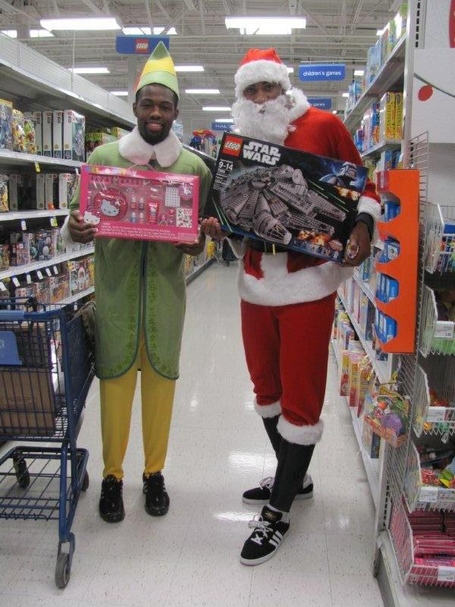