The Pistons trailed by 22 in the fourth quarter, but battled back to force not one, but two overtimes. Unfortunately, they ran out of gas in the second overtime and lost by seven, 126-119.

If you told me in the first quarter that the Pistons were going to force two overtimes and that it would be a result of the bench bringing the team back from 22 down, I would've smacked you in the face and called you an ugly liar.

After 12 minutes of play, the Pistons were down 15, 28-13, had more turnovers than baskets (7-5), and fewer points than Josh Smith (14-13). Brandon Knight, Greg Monroe and Kyle Singler all looked horrible, multiple turnovers each, and it felt like a repeat of April 2011, when the Hawks embarrassed us, 116-84. I was in attendance for both of these games and I was starting to wonder if I was going to break a record for largest combined margin of defeat in consecutive games attended.

But the Pistons never gave up for me, and it shockingly had nothing to do with any of the starters.

Down 12 at the end of the first half, the Pistons were ignited by an Austin Daye three that paced a 9-2 run to help the Pistons pull within five at the break. A 12-2 Hawks run at the end of the third increased Atlanta's lead to 19 heading into what felt like was going to be the final frame, but Detroit's bench again battled back.

Down by as many as 22 in the fourth, Charlie Villanueva and Will Bynum started chucking threes -- and they went in! Six of the Pistons' next seven baskets after going down 22 were Villanueva or Bynum three pointers, a part of a 20-10 Pistons run that cut the deficit to 12. Over the next three minutes, next thing you know, the Pistons were down only four with over a minute to play, as in it as ever.

After Smith missed a pair of free throws, an Andre Drummond dunk and an Austin Daye three-pointer later, the Pistons had a one-point lead with four seconds left. Unfortunately, Al Horford was fouled with 1.8 seconds left and he forced overtime by hitting the first of two free throws.

The Pistons went up four in the first overtime, but gave up the lead in the final minute. In the second overtime, a weak clear path foul on Bynum after an egregious turnover all but sealed the bench's fate in the midst of a 7-0 Hawks run. The Hawks would go on to win by that many, 126-119.

It's hard to know whether Frank's "ride or die with the bench" strategy was most apt. The bench (and Greg Monroe) was a big reason the Hawks went on an 8-0 run to end the third and pulled away (to 22 points) in the fourth quarter. Yes, they got the Pistons back in the game and forced overtimes, but at some point it had to be clear that they, as a unit, were going to run out of "it." I'm okay with Frank sticking with his bench for the most part, which scored the most points by a bench (85) since the Charlotte Hornets in 1999, but at some point I think you have to re-insert your most talented players into the game.

Andre Drummond was a beast with 16 points and 12 rebounds in two seconds over 36 minutes. He also had a block and two steals and affected several other shots. He deserved everything he got, except for that technical foul, which was weak.

For as helpful as Bynum was in getting the Pistons back in the game, I thought he was just as destructive in the overtimes. He was "I-guy'ing" it the entire 2nd overtime and I think it ultimately cost the Pistons. Vince Ellis agreed with me.

Lawrence Frank is so adorable when he's mad. Jumping up and down, harrumph'ing it up and down the sidelines. He cares - you can tell that much. But honestly, I feel like it would be hard to take him seriously if I was an NBA player any taller than 6'.

After the game I got the pleasure to meet Mark Champion and George Blaha. Here's the legend Mr. Blaha and I. His voice soothes the soul, even after a double-overtime defeat. (That's also me in the flannel in the pic above, whispering sweet-nothings into Knight's ear.) 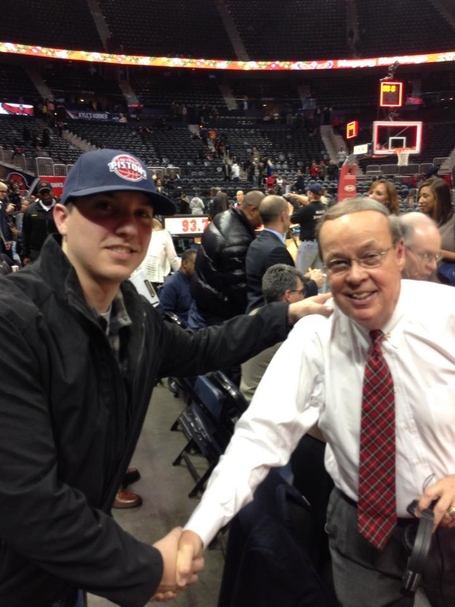