Spurs v. Pistons, PTR vs. DBB: Fraternizing with the Enemy

Share All sharing options for: Spurs v. Pistons, PTR vs. DBB: Fraternizing with the Enemy

You'd think for all the bad blood we shared during the last decade, Pistons and Spurs fans would want nothing to do with one another. But if you take the black and silver or the red, white and royal blue out of the equation, we fans have a lot in common. So we discovered last season, when the intersection of character (and memes) was a bit too startling for our own comfort. If you're behind on the whole story, here's an abbreviated version: 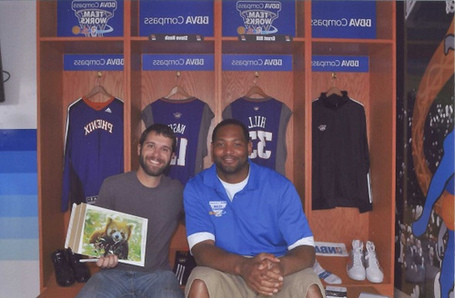 PoundingTheRock interviews us, we interview them, realize we have a scary amount of things in common, even memes. Shinons gets his picture taken with Robert Horry holding a red panda, sends it to SpursFanSteve of PoundingTheRock, and a weird kind of brotherhood was born. Continuing that, I asked SpursFanSteve some questions about his 2011-12 Spurs, he did the same of our 2011-12 Pistons. Without further adieu, here's Steve!

MP: Where is this mystical fountain of youth, and do you think Tim, Tony and Manu would mind sharing a sip or two with Ben Wallace? In real terms, what is the secret to the absolutely excellent seasons that Tim Duncan, Tony Parker, and the newly-returned Manu Ginobili are having? How long do you think it will continue?

SFS: Where it is, I don't know, but it's entirely possible Tim Duncan is, in reality, the Punisher. Or at least cast a spell on his knee brace to give him a +5 to all rebounding, blocking, and jump shooting rolls. As for Tony, he's just as old as 29 year old can possibly be. Manus' powers seem to grow with his bald spot...which is the opposite of what I thought would happen. I've always equated long, flowing hair with supreme Argentine athleticism. Of course, since testosterone is the hormone that causes hair loss (specifically too much testosterone) I suppose it shouldn't be too much of a surprise. If only I could be so lucky. If there's one player I wouldn't mind sharing the fountain of youth with, though, it'd be Ben Wallace. Always enjoyed his blocks and dunks style game. Ben Wallace will always be one of my favorite non-Spurs.

MP: Behind Tim Duncan, Tiago Splitter is beginning to look the real talent that RC Buford has pegged him as. What are your expectations for Splitter? Can he help keep the Spurs semi-competitive after Duncan departs?

SFS: Absolutely. He's definitely not Tim Duncan, but he's a solid defender with an above average post game. He is, IMO, the best backup big in the league, and would likely be a top 6 or 7 starting big. He's better than Marc Gasol- although I'm not sure how much that's saying considering how horribly overpaid he got this summer. If Tim Duncan and Manu Ginobili retired right now, I think we're probably the eighth seed in the West. A lot of that is because Tony Parker is so ridiculously good. The other parts are Tiago Splitter, Danny Green, and Kawhi Leonard.

MP: Kawhi Leonard was one of the few players worth holding on to a draft pick for in 2011. How has he panned out for San Antonio, and where do you expect him to be once he gets a hang of the NBA?

SFS: KAWHI LEONARD IS AWESOME. He's the only player on our team that routinely dunks. He blocks shots. He gets steals. He rebounds like a frontcourt player even though we've been playing him on the wing. He's an excellent defender. Recently, he's been hitting his shots, too, which makes him a bad, bad man. He's also very soft spoken. He fits in perfect. George Hill was one of my favorite Spurs, and, frankly, Kawhi is making me not miss him at all. He limited Kevin Durant, he's covered Lebron. His only major defensive weakness is that he's still learning how to get around screens off the ball. He'll figure that out, though, and then he'll be able to cover everyone from Kevin Martin to Kobe Bryant to Lamar Odom efficiently.

MP: Despite a slight increase in playing time and usage this season, DeJuan Blair's rebounding has appeared to have fallen off. What do you attribute this to? Is Blair useful without being a patented rebounding machine?

SFS: He's not entirely useless if he's not a rebounding machine, because he still makes the other team account for him, but he's also much, much less useful. Put it this way: on Pounding the Rock, he's essentially become trade bait. While I vehemently (and I mean that) disagree with everyone who thinks we should trade him, I certainly feel I'm in the minority. He gets steals and lots of deflections. He's started taking charges. He's outrunning the other team's bigs, frequently being the first guy down the court. He shows flashes of a good post game every now and then, but his inconsistency (on both ends) is what drives everyone crazy.

MP: What are your three favorite memes on PoundingTheRock?

SFS: The TWSS meme is pretty awesome. Honestly, I don't spend enough time in the game threads to keep up with most of the new ones, but we still post a halftime fish almost every game for good mojo, as well as LatinD's Korean comics...although whether those or the meme or that everyone hates them is the meme is up for debate. It's kind of a meme within a meme.

MP: Every team has a rival they hate, and a player they cannot stand the most on that team. For the Pistons, that player is probably Kevin Garnett. Who is it that boils the blood of the fine folks at PoundingTheRock?

SFS: Easy answer? Kobe Bryant. Honestly though he's pretty much at the point where you just have to respect him (at least for me). Chris Paul is up there...Lebron...I'm not sure if there's a consensus. I completely agree with DBB on Garnett, though. I'm ready for his punk ass to retire. Here's my favorite KG highlight reel. I especially like from the 2:30 mark on, where Jason Maxiell eats his baby, Matt Bonner eats his sandwich, and Antonio Mcdyess makes KG crap a brick. I hope DBB enjoys that as much as I do.

MP: Thanks for taking the time to chat, MFSFS. You may wear the wrong jersey at the end of the day, but there's certainly a weird kind of brotherhood between PoundingTheRock and DetroitBadBoys. Also, big ups to 540 comments (and counting) on DBB, Steve. Here's to 540 more before the next interview!

If you'd like to check out what Steve asked me over on PoundingTheRock, check out his post: Fraternizing with... DBB!!