Tonight, when Ben Wallace steps on the court against the San Antonio Spurs, he will have broken the record of NBA games played by an undrafted player. By playing in his 1,054 game he will best one-time Spur Avery Johnson. While nowhere near his "Fear the Fro" heights, I can't imagine there is a single Pistons fan who hasn't been elated by Wallace's return to the franchise the made him a star after leaving for the greener pastures of Chicago in 2006.

And while he bounced around from Chicago to Cleveland to Phoenix, once he returned to Detroit three seasons ago it was like he never left. The fro might have been gone, the blocks not quite as emphatic, but he was still "going to work" every single night.

As a Pistons fan, I am proud and honored that he will break the record wearing the Pistons red, white and blue.

While Wallace has been praised in the past, I don't think he's ever really received the recognition he deserves. He was an elite defender that his team modeled their entire defensive gameplan around. Simply, without Ben Wallace there is no Pistons decade of dominance, and there is no championship banner hanging in the rafters.

With Wallace again reiterating that he is going to retire following this season, and with him on the brink of breaking the games played record, the national media is finally giving the big man his due.

The internet reacts, reflects after the jump.

Ben Wallace is set to break an NBA record, and retire after 2011-12 | Ball Don't Lie - Yahoo! Sports
Kelly Dwyer reflects on the fantastic career of Ben Wallace and even has a nice word (and a not-so-nice word) to say about Greg Monroe toward the end.

Dan Feldman at Piston Powered compares Wallace's first game to his most recent:

"Ben Wallace played his first NBA game Nov. 1, 1996. In a very Wallace-like fashion, he had 10 rebounds, three steals, zero points and zero assists in 19 minutes for the Washington Bullets. Today, against Washington, Wallace tied Avery Johnson for the most NBA games played by someone who went undrafted in the NBA and ABA (1,054). Only Moses Malone, who was drafted in the ABA, has played more games without being drafted by an NBA team (1,329). Unlike that 1996 night in Orlando, where Wallace helped the Bullets to a four-point win, he couldn’t do much tonight. At 37, his best days are nearly as far behind him as they were in front of him in 1996. Wallace grabbed seven rebounds in 12 minutes, a skill that still at least resembles its place in his heyday. But Wallace’s defense has left him."

And while we're strolling down memory lane, check out this awesome photo of Wallace during his days at Virginia Union. 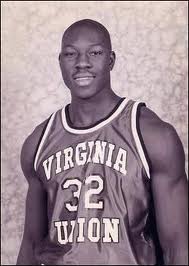 "For NBA role players, they need to do a lot of things pretty well or one thing exceedingly well. Wallace did one thing — play defense in the paint — at an elite level. He covered a lot of mistakes and anchored great teams. Not bad at all for a guy who slipped under NBA scouts radar."

Wallace on verge of mark for undrafted players - The Associated Press
"Wallace once said his older brothers wouldn’t pass the ball to him when he was younger, so he had to fight for it by getting rebounds and steals. It was a good way to learn to play basketball without shooting much."

Pistons' Ben Wallace plays in 1,054th game, second most among undrafted players | The Detroit News | detroitnews.com
But Wallace has never been about numbers, not his 10,301 rebounds, 2,107 blocks, four All-Star appearances or four Defensive Player of the Year awards, so it's not a surprise to anyone that he's downplaying his latest achievement. ... "I'm proud of everything I've accomplished, the fact I've been healthy and able to play at a high level still," Wallace said. "As far as the individual accomplishments, (no)."

David Mayo at Mlive talks about how, inexplicably, Wallace was asked to be a two-guard when he was trying to catch on with the Boston Celtics.

"That was a learning experience," said Wallace, 37. "I was put in a position I didn't feel comfortable with. I knew I wasn't a 2 guard but they invited me to camp. They gave me an opportunity to step on that floor with some of the best in the world. "So I had to step up a bit. At the end of the day, basketball players are going to be basketball players. Even though I played the 2, I still ended up tops in rebounds and blocks and steals. Eventually, a basketball player is going to find his way."

Hitting NBA headlines -- Is Ben Wallace a Hall-of-Famer? - ESPN
ESPN goes 5-on-5, including a question on Wallace's Hall of Fame credentials.

Basketbawful
And who can forget the greatest product tie-in ever, Ben Wallace: Inflatable Defender? 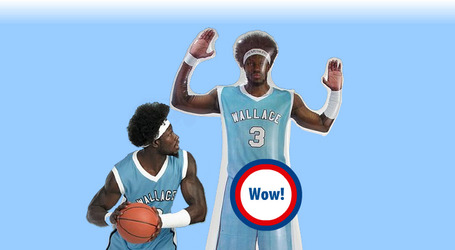 I'm sure we'll do this again at the end of the season, but share your favorite Ben Wallace memories in comments.