A look back at Pistons logos and uniforms: Old School era

Share All sharing options for: A look back at Pistons logos and uniforms: Old School era

I'll look at a different era every day. Today: Old School. Wednesday: Bad Boys. Thursday: Teal era Friday: Modern Day. For all the logos, I used SportsLogos.net. They also served as an invaluable jumping off point for my search of appropriate photos, which all come from www.pistons.com except for the sports cards.

The Pistons have been remarkably consistent with logos considering they've been around in Detroit since the 1950s. And it started at the very beginning, when they moved from Fort Wayne to Detroit they established an early form of the name within basketball that we are all familiar with. From 1957 all the way until 1979 their logo hardly changed at all.

And while the above are boring, they are certainly not regrettable, and even have an old-school charm. If they printed these on a couple T-shirts, I would probably pick one up. And they also served as a great template for the classic logo that those of us who are old enough to remember the Bad Boys days will always think of when considering THE definitive Pistons logo. 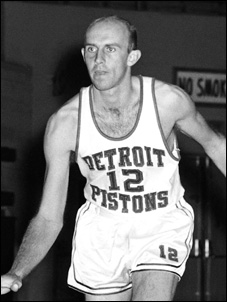 That dashing chap is George Yardley. He predated the Detroit Pistons and spent many years as a Fort Wayne Piston. He was the first player in NBA history to score 2,000 points in a single season and is a member of the basketball Hall of Fame. He retired after just seven years in professional basketball, and is the only player to voluntarily retire following a season in which he averaged over 20 points per game. 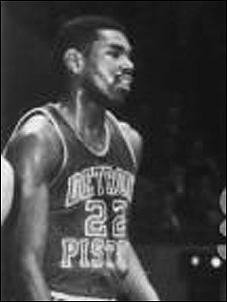 Ray Scott played 11 years of professional ball where he averaged nearly 14 points and 10 rebounds. After his playing days he would go on to coach the Pistons for three-and-half season, even winning a coach of the year award. He also spent some time as the head coach at Eastern Michigan. 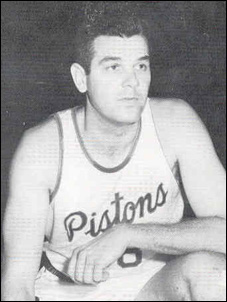 I couldn't find a single road jersey for the threads from 1963-69 but above is the home jersey modeled by Bailey Howell. Howell spent the first five years of his Hall of Fame career in Detroit, where he was elected to four all-star games as a Piston. He would go on to win two championships in Boston. Howell had a gift for scoring and was a tenacious player with a great work ethic -- he played at least 75 games in every one of his 12 years in the NBA. 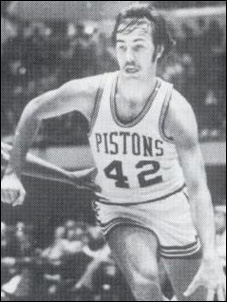 Chris Ford spent six seasons and part of his seventh in Detroit Piston uniform. He was a scrapper and hustler who had limited success. He did go on to win a championship with the Celtics in 1981 and will go down in the history books as scoring the NBA's first 3-point shot, connecting from long range against the Houston Rockets on Oct. 12, 1979. Also served as head coach for the Celtics, Milwaukee Bucks, Los Angeles Clippers and Philadelphia 76ers. 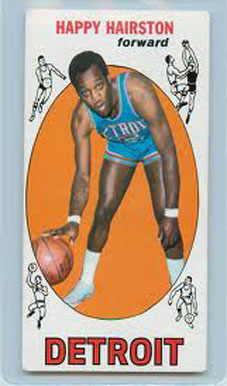 The Pistons briefly sported sky blue road jerseys for the 69/70 and 70/71 seasons as modeled by Harold "Happy" Hairston. He only played one season in Detroit and is better known for the six years he spent with the L.A. Lakers, including championship in 1972. During that championship year, Hairston (1,045) and Wilt Chamberlain (1,572) became the only teammates in history to each pull down at least 1,000 rebounds. 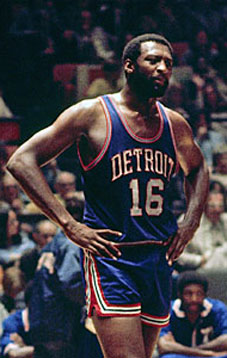 One of the all-time great Pistons, Bob Lanier was an eight-time all-star who tallied more than 19,000 points, 9,500 rebounds and 1,000 blocks in his illustrious 14-year career. The former No. 1 overall pick out of St. Bonaventure was consistently in the top 10 in scoring while wearing a Piston uniform and was one of the most efficient big men of his era. Retired as a career 20-point, 10-rebound, 1.5-block per game player. 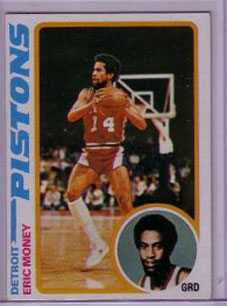 Eric Money played six seasons in the NBA and is notable for the following reasons: 1. He is actually a Detroit native, 2. His last name is Money, which is pretty cool, 3. He was one of the professional basketball players to appear in the 1979 classic "The Fish That Saved Pittsburgh," which is the greatest Julius Erving, Jonathan Winters, Stockard Channing pairing in the history of cinema.