A look back at Pistons logos and uniforms: Teal era

Share All sharing options for: A look back at Pistons logos and uniforms: Teal era

For all the logos, I usedSportsLogos.net. They also served as an invaluable jumping off point for my search of appropriate photos, which all come from www.pistons.com except for the sports cards.

The "teal era" used up and spit out Grant Hill, drove away three coaches and featured three first-round playoff exits in during its brief run. It also featured our first alternative logo and solidified the marketing departments desire to usher the steampunk era into the NBA way before its time. 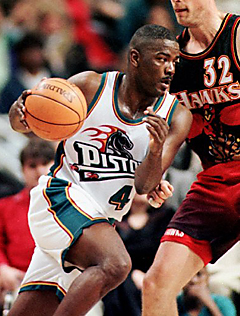 I'm sorry to do this, but I had to begin the "teal era" with a look at Dumars. But only because when you look at it, it just looks ... wrong. Dumars will always be my favorite Pistons player. Much like Barry Sanders, he was a lethal competitor who went about his business quietly and humbly. And he was just as good on defense as he was on offense, with Michael Jordan even calling him the best defender he ever faced in his career. 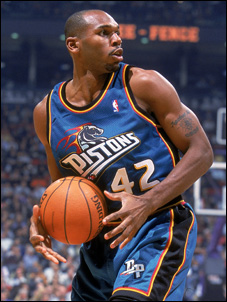 Jerry Stackhouse is still toiling away in the NBA but has only played only 71 games in the past four seasons combined. Stackhouse had the biggest success of his career in Detroit going from a ball hogging malcontent in Philadelphia to a team player and go-to scorer for a suddenly resurgent Pistons team. He made the playoffs three times in Detroit and was selected for two all-star games during his Detroit days. He was in the prime of his career in 2002 when at the age of 27 he was traded to the Washington Wizards for Richard Hamilton as Michael Jordan wanted a new backcourt mate during his final comeback. We all know how that turned out for both sides. 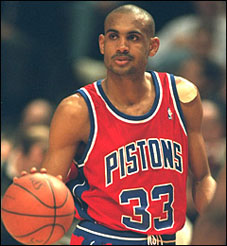 I'm not sure how often the Pistons wore these alternative jerseys, but whatever the number it wasn't nearly enough. They offered the simple red design as a throwback to the bad boys era but the jersey survived for only two season as someone thought it would be a good idea to offer even more stupid flaming horse options (below). Hill will be defined in Detroit as the torchbearer of the "teal ear" and someone who was a great player on poor teams. He eventually forced his way out of Detroit and had designs to win championships paired with Tracy McGrady in Orlando. Unfortunately, in six seasons with the Magic he played in only 200 games while banking a cool $92 million bucks. Fortunately, the Pistons were able to salvage the situation with perhaps the most famous Piston player of the past 15 years as they were able to net Ben Wallace (along with Chucky Atkins) in a sign-and-trade deal with Hill and Orlando. For his part, Hill eventually moved on to health and valuable role player status in Phoenix. 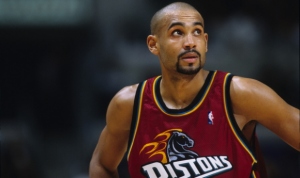 You thought we were done with the ugly era? not quite. The Pistons offered a red alternative jersey for four seasons that incorporated the steampunk flaming horse motif. Enough said.