A look back at Pistons logos and uniforms: Modern day era

Share All sharing options for: A look back at Pistons logos and uniforms: Modern day era

For all the logos, I used SportsLogos.net. They also served as an invaluable jumping off point for my search of appropriate photos, which all come from www.pistons.com except for the sports cards.

Joe Dumars will always have a dual legacy -- one as a player and one as a general manager. And his first great act as GM was to realize that the teal had to go. But there are rules and regulations about how far and how fast a team can change it's colors and logo, so Dumars had to play the game. The first thing he was able to is at least get the color scheme right, as he didn't want other players to suffer the humiliating prospect of playing their final professional game in a teal uniform.

You can see the progression toward sanity above. First get rid of teal, then disconnecting flaming horse from flaming tailpipe (cuz really, how much fire do you need in one logo?), and finally, try and come out the other side with a elegant, classy logo that harkens back to the glory days. 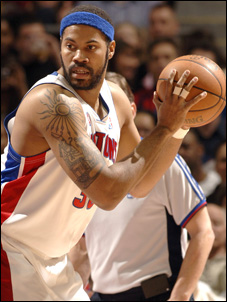 Rasheed Wallace was the master of the outburst. King of the T. Lord of "Ball Don't Lie." He was also a great defender, wonderful teammate and key piece to the Pistons getting over the hump and winning another championship. While many credit Larry Brown and his "play the right way" mantra, the truth is the Pistons were largely just as effective in Brown's first season as they were the two previous under dispatched coach Rick Carlisle. That is, until the team traded spare parts for Wallace. He turned a great defense into an epic, lock-down, all-time defense. A defense best exemplified by the run of holding four straight opponents under 70 points and eight straight under 80 points. I'll never forget how the sub-70-point run ended. The Pistons were up big time and put in Darko "Human Victory Cigar" Milicic. They were in New Jersey and Milicic was matched up with Brian Scalabrine. Scalabrine sunk a bucket at the hoop with seconds remaining thanks to bad Darko defense. And Scalabrine and the Nets were so excited to break the 70-point barrier that he screamed and pumped his fist in pure joy. Joy that his team lost 89-71 instead of 89-69. Ahh, memories. 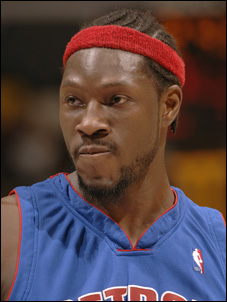 Ben Wallace has received a lot of pub at this and other sites lately thanks to his record-breaking games played streak. And he'll get many more kudos once the season is done and he retires from the game. So i'll just say that Wallace was a truly dominant defender, certainly the best help defender I've seen in my lifetime. Four-time defensive player of the year, more than $85 million in career earnings all for a player that has averaged less than 6 points per game in his career. That is how great of a defender he was/is.

Sadly, it has not been a kind beginning for the current logo. The Flip Saunders era of conference final exits. The Detroit Pistons being beaten by the one-man wrecking crew of LeBron James. The extremely brief Michael Curry (we could do an entirely separate posts about his suits) and John Kuester eras. Ben Gordon and Charlie Villanueva. Yada, yada, yada.

But there is hope in the form of Greg Monroe, who looks right at home wearing the classic Pistons colors, with nary a flaming horse to be found. 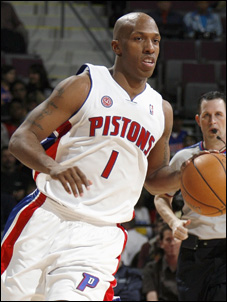 Chauncey Billups was an NBA vagabond before arriving in Detroit and he left a savior of a franchise, an NBA champion, "Mr. Big Shot" and a Finals MVP. While Billups rep for hitting game-winners was a bit overblown, he did have a knack for nailing 3-pointers to put the nail in many opponents' coffins and when the lethargic offense was in need of a bucket. He also was a master at taking care of the ball and utilizing pick and rolls to drive the lane and get to the line. He never had a high field-goal percentage, but with his long-range accuracy and free-throw shooting prowess he was sneakily one of the most effective, efficient offensive players in the league. 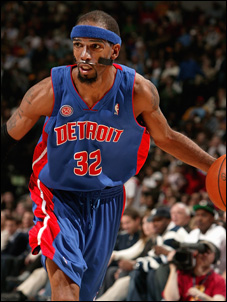 Richard Hamilton might not have left on good terms with the Pistons but he had many great years here and will someday get his jersey retired by the team. He led the team in scoring each season for eight consecutive years, using screen after screen and his endless energy to run his defender ragged and find open shots. Although he wasn't a great defender, he bought into the system and mindset and got better as the years went on. Yes, there is little positive to say about the final two years of his tenure and it will be a permanent black mark on his and others' reputations. But he was still an all-time great Piston who gave back to Detroit and his hometown of Coatsville, Penn. for many years. 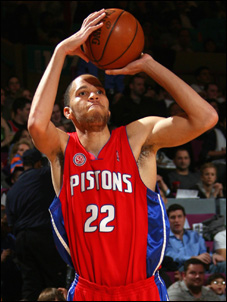 Rounding out the current-era championship starting five is Tayshaun Prince. He is the only Pistons player from the championship era still starting in the NBA (thanks to injuries and retirements) and along with Ben Wallace the only current Pistons that are with the team they hoisted the Larry O'Brien trophy with. Prince came to the Pistons as an unheralded prospect out of Kentucky. He had played all four years and was effective in college, but many had questions if his thin frame could withstand the rigors of the NBA. He put those doubts to rest by playing in every game, including long playoff runs, for six consecutive years. Oh yeah, and The Block.