Share All sharing options for: Mid-season Report Roundup: Pistons not making the grade

The Detroit Pistons are enjoying their brief All-Star break, and with that comes a flurry of mid-season reports and grades. In fact, Detroit Bad Boys has its own here.

I've collected all the grades from your usual sources and put them into a handy little cheat sheet: 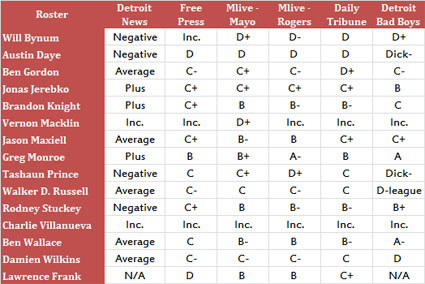 If you want more information on every site's mid-season report, check out the links below.

Vince Ellis: Pistons mid-season grades | Detroit Free Press | freep.com
This was shaping up to be a brutal exercise on the morning of Feb. 3. The Pistons were 4-20, one of the worst records in the league, and talk was rampant that the team should wave the white flag on this season and try to get lots of ping-pong balls for the draft lottery in the hopes of landing Kentucky big man Anthony Davis.

The Pistons mid-season grades - dailytribune.com
The midway point of the season also means it's time to hand out the midseason grades. Few Pistons will likely be happy with their grades from the first half of the season, but the good news is they have 31 games left to improve them.

But who will watch grade the watchmen graders?

Edit: Bonus grades below taken from comments courtesy of V.:

Frankly, this team isn’t even worth wasting time over, grading them. L Frank gets a B in my book.