Pistons at Bulls: Richard Hamilton returns to lineup to face his former team

Share All sharing options for: Pistons at Bulls: Richard Hamilton returns to lineup to face his former team

Pardon my cynicism but I do not find it very likely that the Detroit Pistons are going to go on the road to Chicago and best the Bulls. The Pistons are sitting at +11.5 as I write this and I don't see any reason that won't be the case. Fans upset that the Pistons have tumbled down the NBA Draft Lottery ladder can take comfort in the fact that it is extremely likely that this game goes in the "L" column. The rivalry of the late 1980s this aint.

Honestly, I try and be neutral to positive in these game previews but c'mon. The Bulls are one of five teams with at least 20 wins at home this season. They are 9-1 against Central Division foes this season including two wins against the Pistons. And those two losses were by 16 and 24 points. It is the league's third-best offense against the league's 23rd-best defense. It's the league's second-best defense against the league's 28th-best offense. Yes, Derrick Rose is out tonight but the Pistons are expected to be without Rodney Stuckey and Ben Gordon. (UPDATE: Austin Daye will start at shooting guard with Stuckey and Gordon out). Besides, Chicago is 6-2 since Rose last played, including victories against the Miami Heat, Philadelphia 76ers and Atlanta Hawks. Let's just stop pretending people! Lets reclaim some of our dignity for Christ sakes!

Keys to the Game:

Hamilton's baldness -- I don't care in how many stages he cuts his hair, he isn't fooling anyone. The hair got shorter and shorter until I started to wonder why he was still trying to hide it. The dude is bald and not by choice. He's gone from this: 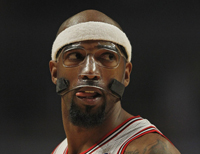 And he also doesn't have the flattering head shape that befits a bald individual. I kind of feel sorry for him, actually. I secretly fear that as I go progressively more bald I will find out that my head has a series of unfortunate ridges that will make me cling to hair i shouldn't (hello, comb-over!) or end up looking like Sloth from The Goonies.

Hamilton's decline continues -- I hate Hamilton much less than many Pistons fans. But even as someone who doesn't carry any baggage now that the Rip era is over, I freely acknowledge that Hamilton was the heart of a dysfunctional locker room the past couple of season. But when Hamilton was bought out I was not only happy for the Pistons but also happy for Hamilton. He had a chance to start fresh and show the NBA that his dwindling numbers in Detroit were a product of a mismatched roster and not a lack of skill on his part.

This season has not worked out that way for him, sadly. He's played in only 16 games this season while averaging just more than 11 points per game, and he has reached double figures just once since January. He's not killing the Bulls, but he isn't the missing piece at shooting guard that Chicago was hoping for.

Hamilton's $$$ -- While Hamilton has not worked out for the Bulls to some extent, I suppose now is the time to remind you that the Pistons are paying him $6 million this season and $6 million next season NOT to play for their team. Commence to Dumars bashing.

Question of the Game:

If one player had to remain on the Pistons and the other had to play elsewhere who would you pick -- keep as it is with Hamilton gone and Tayshaun Prince here or Hamilton here and Prince gone?