Pistons unlikely to use amnesty, wouldn't matter much anyway

Share All sharing options for: Pistons unlikely to use amnesty, wouldn't matter much anyway

Tip of the hat to Dan Feldman at PistonPowered who caught the following quotes from Keith Langlois in recent Pistons Mailbags:

It seems unlikely to happen this summer, though.

As for the amnesty, I don’t anticipate the Pistons using it this off-season.

Three separate indications from Langlois that the Pistons are unlikely to use the amnesty this summer. That's about a close to a sure thing as we're gonna get.

In this day and age, it's fairly easy to get the pulse of Pistons fans, thanks to Twitter, blog comments, and things like the Pistons mailbag. It's safe to say that many, if not most, fans have given up on 2009's major acquisitions and are ready to move on. Count me among them. If Feldman is correct, and I think he is, Langlois' comments here can be read as a way to prepare fans that Gordon and Villanueva will remain around for at least one more season.

Disappointing as it may be, a careful look at the Pistons' salary profile reveals that the Pistons don't have a tremendous amount to gain by using the amnesty clause this season.

Those numbers dumped into a pretty chart after the jump.

Quick preface: note that while I've used the most credible source of which I am aware for the salary information below (ShamSports.com), please consider the following to be estimates. This is especially true due to Richard Hamilton's buyout and the new CBA. Once Larry Coon gets his FAQ for the new CBA finalized and posted, I will feel a little more confident about things like cap holds, cap exceptions, and buyouts. However, what follows should be pretty close, at least.

That out of the way, let's dig into the numbers. 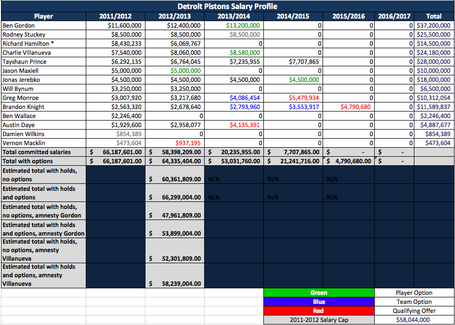 There are lots of variables and complications here - like whether or not Maxiell opts out or not, whether Macklin is brought back for a second season, Kyle Singler's decision to play in the NBA or overseas, and of course, where and whom the Pistons select in the 2012 NBA Draft.

In spite of the uncertainty, at least one thing is relatively clear - the Pistons are unlikely to gain significant cap flexibility this summer by using the amnesty clause.

If Gordon were amnestied, the basement salary number of approximately $48 million is possible (assuming Maxiell opts out, $5 million less if he doesn't), giving the Pistons somewhere around $10-11 million in cap flexibility (or $5-6 million with Max opting in). That may be enough to add a couple pieces via free agnecy, but it comes at the high cost of paying Ben Gordon the difference between his current contract and the one he would receive, which would likely be much smaller.

If the Pistons stand pat, they are likely to have the Mid Level Exception of $5 million available, enough to add at least one piece, or approximately the same amount of money they would have if Maxiell opts in and Gordon is amnestied.

Using the amnesty on Villanueva results in even less flexibility. In fact, depending on other variables, it might not produce any additional cap room at all.

The hard reality is that Gordon and Villanueva appear to be sunk costs, at least for one more season. As much as many Pistons fans want to see those ties cut and a full rebuild commenced, the financial benefits of doing so don't outweigh the costs. At least not right now.

Detroit Bad Boys levied some of the harshest criticism of Prince's and Stuckey's contracts when they were inked, largely because of the future cap implications, as any Pistons-focused media. The salary profile above underscores and amplifies that criticism. The financial situation in which the Pistons find themselves was entirely predictable and avoidable.

Do the math for yourself. The situation advocated by many right here - Stuckey retained at the qualifying offer, Prince left to sign elsewhere, and Gordon amnestied - would have given the Pistons significant cap flexibility, allowed playing time for youth, and still provided the ability to draft three players in the 2012 NBA draft. And in terms of wins in the here and now, the impact would have been minimal, if it existed at all.

Just epinion, but I'd take that eight days a week. Instead, well, it is what it is.